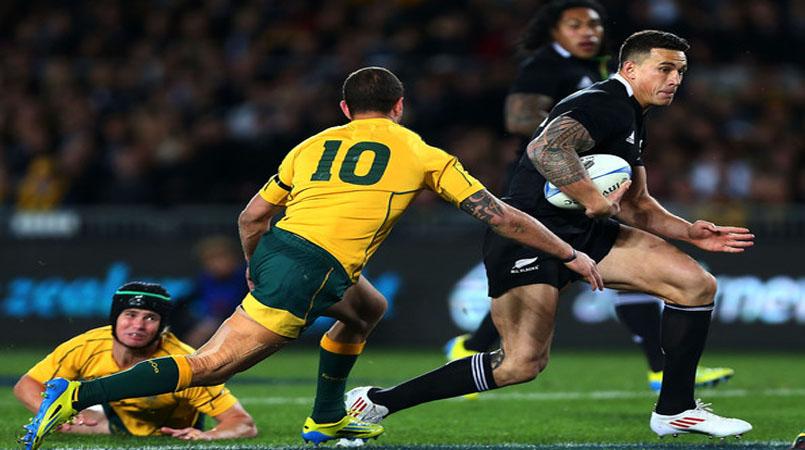 Sydney is set for a likely Sonny Bill Williams' showdown with close friend Quade Cooper after the dual Kiwi international was selected to make his All Black Sevens debut.

Williams has been included in the New Zealand squad to play in Wellington this weekend, a strong pointer he will also feature in the inaugural Sydney 7s world series leg on February 6-7 at Allianz Stadium.

The All Blacks' World Cup champion has taken a season off Super Rugby to seek selection for the Rio Olympics, and his new coach, Sir Gordon Tietjens, says Williams is ahead of schedule in his transition to the seven-a-side game.

Tietjens said the biggest learning area was just understanding the game, which was so different from 15s rugby, but he was impressed by Williams' "sublime skill sets", work ethic and ability to learn.

He indicated the 191cm, 108kg former Sydney Roosters and Canterbury NRL premiership back-rower would probably start in the forwards, but could equally be used in the backs.

Williams, who has also encouraged Cooper to try his luck with the Australian Thunderbolts, admitted the transition to sevens was tough and Tietjens' legendary training sessions hadn't disappointed.

“It's just a whole new game and I'm pretty happy with where I'm at the moment,” he said.

“I've still got a lot to learn but the best thing for myself is just to stay healthy and get out there on the training pitch and learn first-hand."

He said he wanted to give sevens his best shot and that is why he was concentrating on the game full-time this year.

“There are so many talented players, it's going to be really tough to make the Rio squad.”

But the Wallabies playmaker has been locked in to make his debut in Sydney in a strong Australian outfit including a number of key players who are being rested from the Wellington tournament.

The New Zealand line-up for Wellington also features brothers Akira and Rieko Ioane, who have both played for the All Blacks Sevens but will be making their first appearance together in the same event.

Hurricanes flanker Ardie Savea returns to the side after featuring across six tournaments in 2012.

New Zealand, the most successful country in the series' history, are back in seventh place, one spot ahead of Australia, on the points table after the first two rounds of this season's 10-tournament circuit.