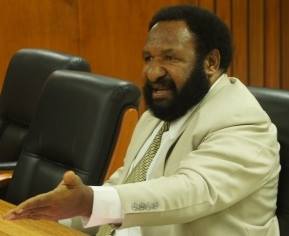 PORT MORESBY:The Opposition has welcomed the call by a government MP to dismiss their fellow MPs, who are either guilty of a crime or miss Parliament sessions without a leave of absence.
“Our alternative government supports this call   by the Hela Governor and parliamentary leader of the People’s United Assembly Anderson Agiru.
“It will not only preserve the integrity of Parliament but also in setting a new leadership culture in PNG,” said the Opposition Leader Don Pomb Polye.
Mr Polye said this would complement well with the Speaker’s crusade to ‘transform, reform and revive the Parliament.’
He said he understood there was no provision in the constitution, catering for something of that sort.
“In this term of Parliament questions, raised on whether those convicted or guilty of a crime should attend sessions, remain unanswered?
“Confusions are still hanging in the air and that the governor’s call on the Speaker to seek the Supreme Court’s interpretation on this is timely and appropriate,” he said.
He said the court would diffuse any uncertainty in this matter.
He added that in other advanced democracies, parliamentarians voluntarily step down in respect of their Parliament and the office which they occupy.
“In PNG it is a different story. However, the Prime Minister should take the lead, firstly, ask those MPs in his ruling party to do the right thing by way of resigning from their respective offices and followed by the Prime Minister, himself,” he said.
SHARE THIS
Share it Tweet Share it Share it Pin it