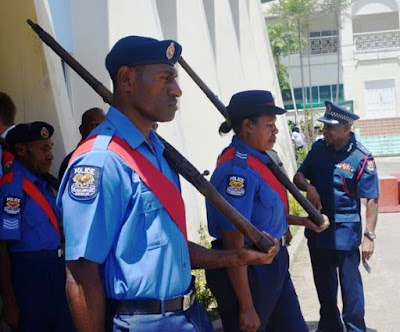 Acting Deputy Commissioner and Chief of Operations, Mr Jim Andrews has supported calls made by Prime Minister Peter O'Neill to weed out corrupt and undisciplined police officers. "We will be meticulously investigating all those cases and those implicated in such allegations will be dealt with accordingly," Mr Andrews said.
He said, "Police brutality and discipline issues are issues only the police management can fix".
"We have the best discipline standards and processes in place to effectively keep our members in line and to deal with our members who have stepped out of line. However, our problem is with the
implementation or enforcement of these standards and processes". "I will therefore be issuing a directive to Regional Police Commanders to ensure Met Supts and PPCs under their command to effectively take command and control of their men because they will be personally held
responsible for the conduct of their men". "I expect commanders to take action on their men before I am forced to take action on them for failing to command and control their men. As an example the policeman who forced the woman to swallow condoms should have been identified and charged already. If not then I will want to know why this has not happened and waiting for the Commissioner
and his senior management to come down and do their job," said Chief Andrews. "In the directive to all commanders are to deal with their men to address this serious problem of police brutality, corruption and lack of performance," Mr Andrews said.
Deputy Commissioner Andrews said NCD is the worst offender with regards to police brutality and other related issues which are to be addressed forthwith.
"NCD is PNG so once the problem is adequately addressed here the rest of the country will follow suit," Mr Andrews said.
He said as a move to enforce discipline and command and control he will form a committee within the Internal Affairs Directorate to fix these problems.
"I believed we also have a number of Notice of Penalties (NOP's) that was supposed to be served on members but have not been served, for various reasons. This committee will work with the Internal Affairs Directorate to find out the status of NOPs."
NOPs that have not been served will be served and officers who have failed to have served NOP's within the expected time will be also dealt with," Deputy Commissioner Andrews said, adding that he was committed in the fight against corrupt and abusive officers.
SHARE THIS
Share it Tweet Share it Share it Pin it