NCD Governor Yet To Receive Report on Affected Taurama Settlers 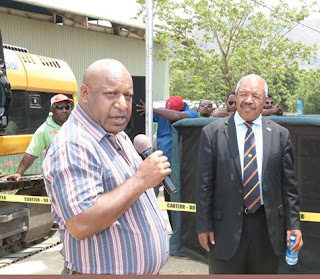 The consultancy team tasked to assess valid land titles from settlers that face potential negative impact from the construction of the new Taurama four-lane, is yet to issue its report to the National Capital District Commission, NCDC.
NCD Governor, Powes Parkop, revealed this  to  PNG TV Live.
The report will assist the City’s authority handle concerns raised by settlers and seek options for possible relocation.
BKP Associates, headed by former City Manager, Bernard Kipit, is the consultancy team engaged by NCDC.
“We have a consultancy team that have engaged with the potentially affected but up until now I haven’t got a report on the different options available on how we can deal with settlers’ grievances,” Governor Parkop said.
Land from Vadavada to Taurama Beach is the area on which the new road will run.
But several settlers that have purchased land from traditional landowners are experiencing the dilemma of either moving their properties inwards or face imminent demolition.
The settlers’ complaints stem from the width of the road, which invades their land.
“The four lane road width requirement is 50 meters and the people that’ll be affected are pushing for it to be reduced to 30 meters to save their properties but if that’s done then the road space will be limited.”
“The compromise we can make is 40 meters but definitely not 30 meters as its impossible - they should be prepared to bite the bullet,” Governor Parkop said.
The four-kilometer Taurama four-lane road will cost K178 million kina with completion expected in July 2017 by contractor, Global Construction.
The payment comes from a loan worth K500 million from Bank South Pacific that Governor Parkop acquired, which will also be used for seven other major road constructions in the City.
Parkop says, despite the report from BKP still pending, potential affected settlers must be prepared face demolition.
“I understand their complaints and I sympathize with them - I know it’s going to affect them.”
“Some properties will have to be demolished because of the road, but the choices we have are very limited.”
“That section from Vadavada all the way to Taurama will be fully developed in the 10 years – it’s going to have proper houses both residential and commercial or even industrial and we need to build that road now rather than 10 years later when the population capacity has increased,” Parkop said.

Image: Governor Parkop listens to concerns raised by affected businessman along Taurama after official groundbreaking ceremony of the New Taurama Four-Lane, in November 2015