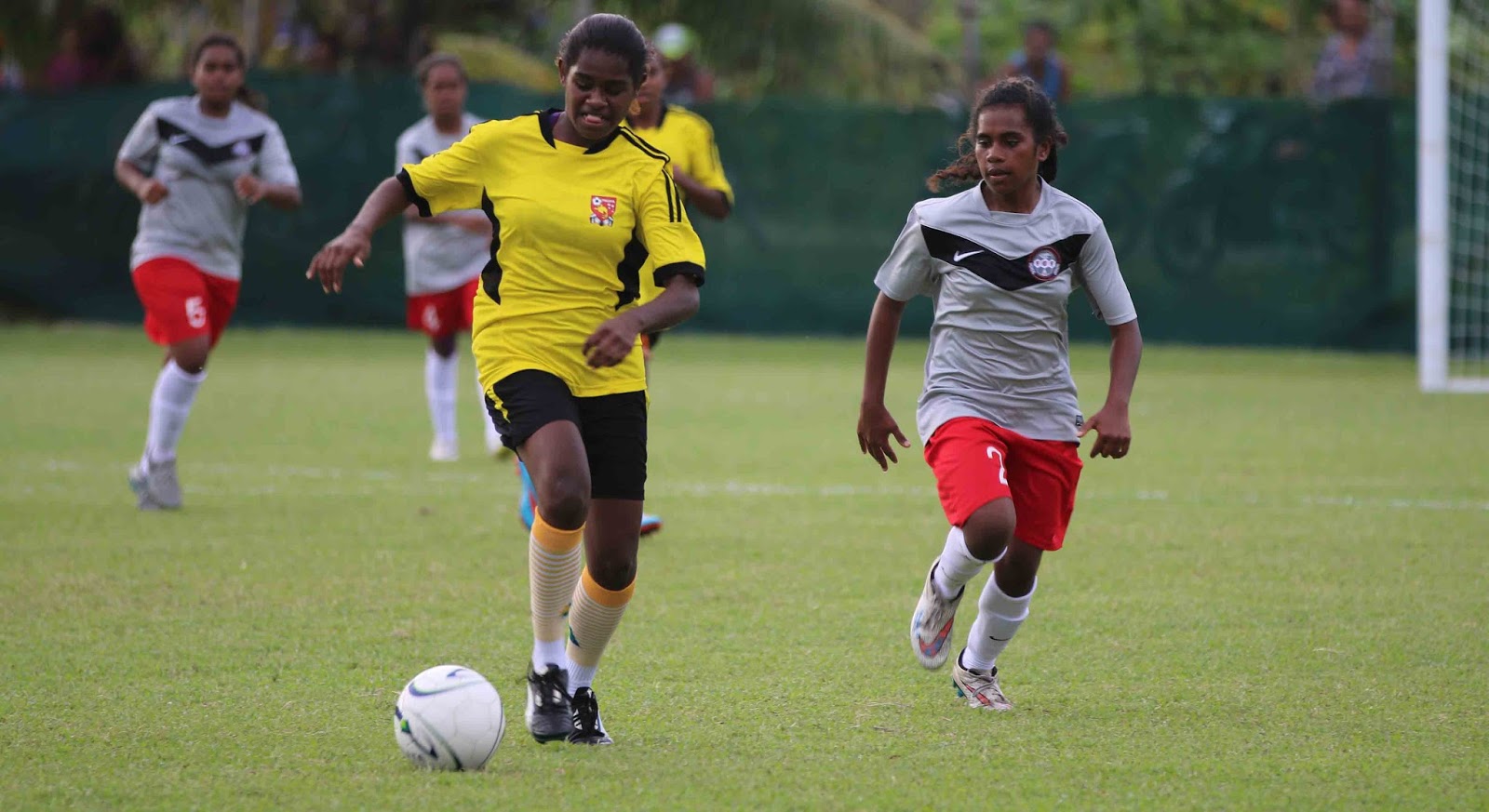 While they will both meet in the decider as unbeaten teams, their semi-final experiences couldn’t have been more different.

New Zealand cruised through with an 11-0 drubbing of Fiji at the CIFA Academy, while later in the day on the same field Papua New Guinea had to wait until the last minute of play to secure a 2-1 win over New Caledonia.

Given a free kick from just outside the box with the clock showing 90+3 minutes, midfielder Robertlynn Kig blasted the ball into the top of the goal, with the shot deflecting off the bottom of the crossbar and into the net.

It was the second time Kig had scored a free kick in the game, adding to her effort in the fourth minute which had given her side the lead.

Post-match Papua New Guinea coach Margaret Aka spoke of the moment she realised the free kick had gone in.

“I have never screamed so hard and loud before, I am so glad that the last kick went through, I am so happy for the girls tonight,” Aka says.

“We actually started slower than New Caledonia, and to be honest they actually played better than us tonight.

“But I thought my defence kept us in the game and that our keeper Faith Kasiray really stood up, I thought our keeper was our best player tonight.”

Across in the New Caledonia dugout, coach Matthieu Delcroix, put on a brave face following the defeat, complimenting his team for the way they played through the 90 minutes, which saw them come back from an early 1-0 deficit.

“Two free kicks, two goals conceded, but that’s football. We played some good football with some very good short passing, but I can’t ask for anything more, they did everything I asked.

“Congratulations to Papua New Guinea, they played really well too.

“This tournament has already been a success for us because we have shown that New Caledonia women can play football at this level.”

After Papua New Guinea took the lead on four minutes via Kig’s free kick from 30 yards the game fell into somewhat of a holding pattern, with neither team able to put the finishing touches on any scoring opportunities.

Both sides resorted to some long shots but never found success, leaving the score 1-0 at half time.

New Caledonia’s Jackie Pahoa started the second half well, coming close to scoring after putting some footwork on two defenders and eventually having her shot blocked away for a corner.

That started a ten-minute period of dominance for New Caledonia, but despite having almost all of the possession they couldn’t convert it into a goal.

As the match went on the contest became increasingly physical, and a number of challenges saw players receive final warnings from referee Nelson Sogo.

With 15 minutes to go Papua New Guinea pushed it too far and conceded a penalty after taking out a New Caledonia player inside the box, gifting their opposition the chance to draw even.

Up stepped Pahoa to slot the penalty neatly into the corner of the goal and tie things up at 1-1.

The final 10 minutes were hectic as both teams tried anything they could to find an equaliser, only for Papua New Guinea to take full advantage of their last use of the ball, sealing a famous victory and a spot in the 2016 OFC U-17 Women’s Championship final.

Joining them in the 23 January final will be the defending champions New Zealand, who were dominant 11-0 winners over Fiji in the earlier game at the CIFA Academy.

New Zealand continued their formidable form which has seen them win every game at the tournament so far by double digit margins without conceding a single goal.

According to coach Gareth Turnbull the performance was far from the polished one he had hoped for, but he admits it is pleasing to get through to the final with a stretch of convincing victories.

“It is great for us to get a result and get through to the final unscathed,” Turnbull says.

“But to be honest we are disappointed, we didn’t meet our high standards for long today, for small periods we did, but I am a little disappointed.

“Hopefully we can reflect and learn and move on from that.

“Fiji were excellent I thought, their captain and goalkeeper in particular should be very proud of their efforts.”

An eighth minute opener to the current tournament Golden Boot Hannah Blake got things started for the New Zealand side, in what would be one of seven first-half goals.

Emma Main grabbed a double inside the opening 45 minutes, along with Blake who scored her second in the first minute of added time.

Jacqui Hand, Sarah Krystman and a Fiji own goal took the lead out to seven at the break.

Despite the scoreline they were faced with Fiji made a positive start to the second period, repeatedly catching New Zealand offside with their fast-moving line, and putting in some well-timed challenges to disrupt the flow of their opposition.

While the effort was good enough to keep New Zealand scoreless for the opening 25 minutes of the second half it wouldn’t last long, with Tawharu getting in behind the defensive line and scoring on 70 minutes.

By the 80th minute both Tawharu and Hand had their doubles and New Zealand were up 10-0.

A third for Hand in the fourth minute of additional time would close the scoring, wrapping up a comfortable victory for New Zealand and a meeting with Papua New Guinea in the decider.

For Fiji it means a trip to the 3/4 play-off in their first ever OFC U-17 Women’s Championship.

Coach Yogendra Dutt was philosophical at full time, concluding that his team could not have done any more on the day against New Zealand.

“We are really proud because we came here with the aim of finishing in the top four,” Dutt says.

“You can’t have all of the success you want all at once. The girls played to the best of their ability, that’s all we could do in this game.

“We held them out for periods, our defending was done well at times and the girls did well.

“New Zealand played very well and are certainly going to be hard to beat in the final.”

The 3/4 play-off between Fiji and New Caledonia opens the action on the final day of games at the 2016 OFC U-17 Women’s Championship on 23 January.

The game kicks off at 2pm local time and will be followed by the final between New Zealand and Papua New Guinea at 5pm local time.