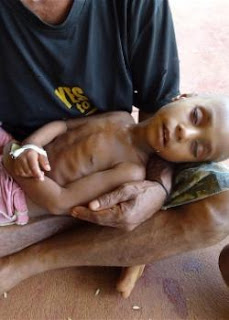 People are dying of malnourishment and disease in remote, drought-stricken communities in Papua New Guinea who will need food aid for the next few months to prevent more deaths.

Sally Lloyd, an Australian who grew up in Western Province, has been raising the alarm after returning to her childhood home where she saw severely malnourished people. At least two people died in the community of Mougulu during her visit from 29 December to 19 January, but she said there have been more deaths in the area that have gone unreported.

“We saw and heard of people very weak and thin, malnourished children and a lot of people fainting due to their condition,” she told IRIN. “I would expect the death rate will climb quickly now if help does not arrive soon – many are very weak, very hungry.”

Lloyd said diseases like malaria are taking an increased toll, as people are too weakened by hunger to fight off the sickness. She has created a Facebook page to raise awareness and money for food relief.

PNG has been severely affected by El Niño. The weather phenomenon has been linked to drought and frost, which devastated crops last year, leaving subsistence farmers with nothing to eat.

“In October we walked through red dust – something I have never before seen in this area of mud and high rainfall,” said Lloyd.

The latest data suggests that as many as 700,000 people in PNG are in critical need of food assistance, according to the World Food Programme. Regional WFP spokesman Damian Kean told IRIN that gathering information about food security is difficult because it is hard to access many communities.

Kean said that staples like sweet potatoes were destroyed by low rainfall throughout 2015 and then by frosts from July through October, while insects destroyed many crops planted after that. He said WFP has a team in PNG gathering data about where the biggest needs are and the organisation is prepared to help relief efforts if asked.

“The government has not issued an official request for assistance, or declared a state of emergency,” said Kean.

The government began investigating reports of deaths linked to lack of food after Lloyd gave a presentation in the capital, Port Moresby. Local media have reported government airlifts of food to some remote areas this week, but Lloyd said that many badly affected communities have yet to receive aid.

The response is complicated by PNG’s rugged terrain.

Lloyd said many communities are accessible only by “a hard week’s walk from the nearest town”, or by fixed-wing aircraft that can land on small strips hacked from the jungle. This makes it difficult to get information out, and expensive to get food aid in.

As the government ramps up its response, many people are running out of time.

Lloyd gave the example of a young boy in Mougulu who was carried into a clinic unconscious one night. “Hunger had wasted him and he was dehydrated,” she said. “They couldn't get a drip line in.”

Lloyd said she had rehydration tablets with her, so they revived him slowly by dissolving them in water and dripping it into his mouth.

“He came around eventually, but I cannot help but wonder how he will cope going back to a home with either no food at all or possibly a little sago now and again,” she said, referring to a starch extracted from palm plants.

“I hope he will make it till help arrives.”.