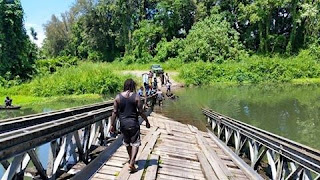 Buka Police have reported an accident in Buka during the festive period. The accident in Ieta village was caused by strong winds that had felled a tree branch and killed two persons a youth and a child.

The branch suddenly fell on the two unsuspecting people and killed the youth instantly whilst the child died at the Buka Hospital.

Police in their Christmas message to the ABG leadership and the people of Bougainville to observe this Christmas peacefully.

Senior Sergeant Earmart Tsimes called on the people of Bougainville to respect one another this Christmas and do not enter into activities that can create disunity in our communities.

He said Christmas was a time of family re-union and should also be a time of reflection.

Sergeant Tsimes also called on the people of Bougainville not to create fear or harass other citizens but allow freedom of movement to continue so that the people are free to move around during the festive season.

Meanwhile, reports from other Centres like Arawa have also reported a quite Christmas.