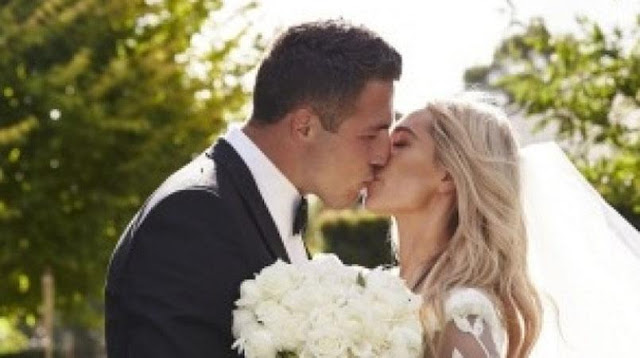 Dressed in a bespoke suit designed by Giorgio Armani, Burgess was joined at the alter by his groomsmen - footballer brothers Luke, Thomas and George, and close friend Chris Feather.

The bride, wearing an Alex Perry gown, was led down the aisle by her bridesmaids - sisters Jemima and Harriett, best friend Phoebe White and sister-in-law Yolanda Hodgson, also dressed in Perry.

Crowe, the Rabbitohs owner and Burgess' mentor, attended the event with his two sons, along with many of the club's stars including current captain Greg Inglis, Isaac Luke, and Luke Keary.

Their wedding was initially expected to take place early in the new year, however last week, Burgess' fiancee Hooke hosted her "hen's party" at Woolloomooloo's China Doll restaurant with a small gaggle of girlfriends, and her now-mother-in-law, Julie Burgess, and Sam's grandmother Val.

Burgess, who recently returned to Sydney and to his old club, the Rabbitohs, and Hooke, a former writer for women's magazines, became engaged during a European holiday in May and have been inseparable ever since

Like many others of their generation, Burgess and Hooke have documented their romance a great deal on social media websites such as Instagram, with the footballer most recently filming his fiance dancing to the "Carols in the Domain" broadcast wearing her underwear.

A clearly smitten Burgess wrote on Instagram about the performance: "It's clear that @phoebehooke is enjoying 'Carols in the Domain' tonight. Whilst our apartment is empty she uses it as a dance floor - clearly."

The couple met a little over 18 months ago, with Hooke telling the Bath Chronicle in May about their first encounter: "Sam and I met just over a year ago. Neither of us really frequent concerts but we ended up bumping into each other at an Avicii show in Sydney and chatted the whole time. He put his number in my phone and we had our first date a few weeks later while I was in hospital with back problems.

"Before he came to visit me I had my friend rush a pair of track pants to me because I didn't want him to see me in my PJs. We clicked and our banter just worked, which is the most important thing. We like to laugh."