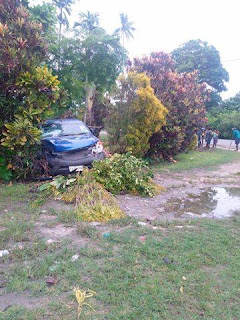 A Grade twelve student is death and two others seriously injured after a speeding vehicle ran into the trio at Noru village Ieta on Buka island early Sunday morning 27th December, 2015, the Dawn FM reports.

North Bougainville Police Commander, Inspector Spencer Aili told New Dawn FM today that the driver an employee of Toyena Guest house was under the influence of liquor at the time of the accident.
Inspector Aili said that the driver was alone and running at high speed and ran off the road hitting three persons who were walking beside the road.

He said after hitting pedestrians, the vehicle ran into the village but did not hit any houses in the village.
Inspector Aili said that the two injured are recovering at the Buka General Hospital whilst the driver is in Police custody awaiting investigations.
He said the car involved in the Accident is a BT 50 Ford Ranger single cab and blue in color also owned by Toyena Guest House.

Meanwhile, Police also reported another Traffic accident at the same location on Christmas Day 25th December, 2015 between 8pm and 10 pm.
Police Commander, AILI said that this time a HONDA CRV owned by HAPPY SOUND TRADING a Chinese Shop in Buka town ran at high speed and ran over a Bus Stop sign completely ripping off the sign whilst trying to avoid hitting a fifth element vehicle ahead of it.
No one was injured in this accident. Dawn FM
SHARE THIS
Share it Tweet Share it Share it Pin it