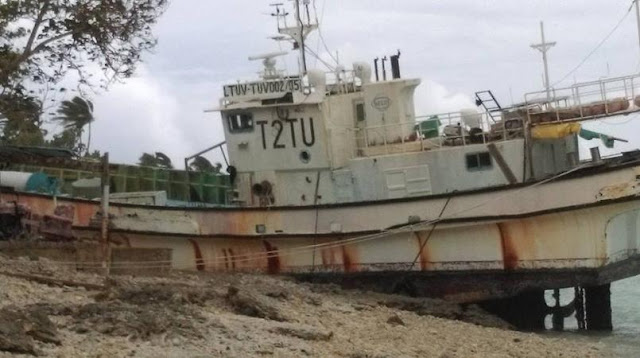 Fenui News reports people residing near the western coast of the island were evacuated to Liutala Maneapa and Vaipuna Primary School as strong winds and heavy rain lashed the island.

Strong winds overnight brought down trees and pushed the MV Tuvalu onto the beach.

Members of the community of Nui worked with the Disaster Committee and cut down big trees near homes and cleared the road.

Parts of the main road on Funafuti were flooded.

In the next 24 or 48 hours it will reach Tuvalu waters and will pass through between Niulakita and Rotuma.

It’s moving at a slow pace.
The other active low pressure formed at the southeast of Tuvalu near Samoa is also intensifying and moving slowly towards the south.
Tuvalu continues to be affected by heavy rain and thunderstorms and gale storm from west to southwest at 30 to 35 knots on land areas and at 45 knots on open waters triggering 3 to 4 meters waves.

The Tuvalu Island Disaster Committee on all islands is on alert.