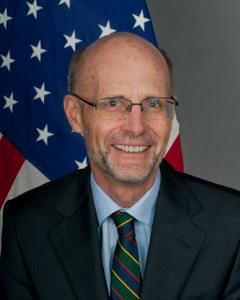 Papua New Guinea Opposition leader Don Polye has farewelled the out-going U.S ambassador to PNG, the Solomon Islands and the Republic of Vanuatu Walter North saying he has served his country with distinction.

As the alternative Prime Minister, Mr Polye said under North’s leadership since 2012 the country’s relationship with the United States had reached higher heights and under that the country also saw a rise in American investors among others.

“On behalf of our alternative government, let me thank the out-going ambassador for an outstanding service for the betterment of both countries.

“Your legacy will live forever in the shores of PNG and abroad,” he said.

He said Ambassador North would be succeeded by Ambassador-designate Catherine Ebert-Gray, who has been confirmed recently by the US Senate, will assume office early next year after presenting her credentials to the government.

Polye said he was reliably informed that North would depart in late January.

He added that Ebert-Gary had vast experience in Foreign Service, saying she was not only a career member of Senior Foreign Service and Class of Minister-Counselor but also was currently serving as the Deputy Assistant Secretary in the Bureau of administration’s office of logistics management.