6/01/2020 Headlines, PNG News
PNG PM James Marape is attempting to claim credit for the monumental PNG Electrification Partnership (PEP) project that was negotiated during the APEC Summit in 2018.
Hon. Peter O’Neill, CMG, MP, the Leader of the People’s National Congress Party,  said the PEP was very important outcome from APEC in Papua New Guinea, that had  nothing to do with Marape who did not show any interest. 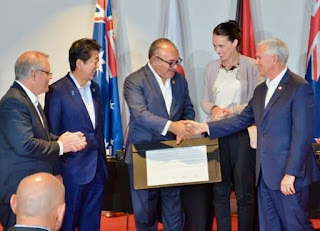 “The PNG Electrification Partnership was driven entirely by our Government and was
signed at APEC, but has stalled over the past year as this government has done
nothing to expand electrification throughout the country,” Mr. O’Neill said.
“Our APEC partners who signed the US$1.2 billion program have made a clear and
honest commitment to deliver this electrification program that was intended to extend
connection to electricity for 70 per cent of our people by the year 2030.
“The partners have hundreds of millions of Kina set aside right now to move the project
along and connect rural and remote communities, and they have been doing what they
can to get their initiatives moving, but have been let down by this government.
“That is why the four partners, Australia, Japan, New Zealand and Japan, forced the
government to meet with them to try to advance plans to get things moving.”
It has also become clear that the government has tried to pull a fast deal on PEP
partners with James Marape telling them he does not support the development of off￾grid power generation and distribution.
“To change the project away from off-grid power will mean that remote and rural
communities, who are not located near existing power grids, will miss out on receiving
electricity under the PEP.
“In making this demand, Marape is standing in the way of investment in sustainable
electricity infrastructure for remote and rural communities, such as solar power, hydro￾generation and geo-thermal power.”
There is wide speculation that the reason for Marape opposing off-grid facilities funded
directly through the PEP, is so that he can outsource these contracts using PEP funds
to pay his cronies and their connections with dubious power companies.
The failure to move the PEP forward over the past year has also meant that the
Australian program is doing the right thing and is focusing their investment on off-grid
projects, because they can’t work with this government because of corruption.

“Japan has been left waiting for the government to co-operate transparently. They are
currently focused on the double circuit transmission line from Yonki to Lae that had
been agreed between our Government and Prime Minister Shinzo Abe, and the Ramu
Grid Reinforcement that was agreed seen years ago.
“New Zealand has resorted to only funding existing programs and have now even had
to find 100 per cent of the salary for the project Chief Financial Officer separately from
their original support program.
“The commitment from the United States is also now only technical assistance until
the government gets properly involved in the PEP.”
In an official News Release (27 May 2020), James Marape is now making outrageous
promises that he will expand electrification to 70 per cent of the population by 2025.
“This 2025 promise is just another lie to try and create cruel false hope, because it is
impossible to expand access to electricity from the current 13 per cent to 70 per cent
of the population in just five years.
“That rate of expansion and infrastructure construction is simply unrealistic even for
the most advanced countries in the world.
“Overall, there have been almost no new connections over the past year by PNG
Power compared to nearly 20,000 in 2018.
“Due to ongoing and significant government interference on questionable new power
stations, PPL has not been unable to even provide power reliably let alone make new
connections.”
Reports from the meeting between James Marape and Electrification partners also
reveal that he requested to change the PEP title as he said it was created by the
O’Neill Government, so he wanted the name changed to something he invented, but
they refused this petty request.
“Marape’s failure to advance the PNG Electrification Partnership project, his ridiculous
demands on our partners and attempts to divert funding, is a disgrace and an
embarrassment to our country.
“Our partners came to the table in Port Moresby during APEC with our shared goal of
delivering electricity to our people who are most in need around the country, and they
have been frustrated by the incompetence and corruption of this government.