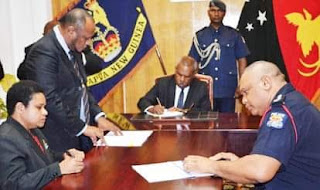 Governor General Sir Bob Dadae signed Commissioner Manning’s contract together with seven other heads of departments and agencies for a term of 4 years today at the Government House in Port Moresby.

After the swearing in ceremony Mr Manning thanked the Marape-Steven Government for having the confidence and giving him the mandate to command the Police force.

“This signing ceremony is a significant event at this point in time. It puts to rest a lot of issues and it gives me the confidence to take on the challenge without any hesitation.

I want to thank the Marape–Steven Government for having the trust and confidence in me. I have already looked into key priority areas within the police force to improve the policing services to the country,” Mr Manning said.

He said the immediate priority now is to ensure the Covid-19 SOE operation nationwide is successfully accomplished and the society adapts to the new normal at the earliest.