4/02/2020 Headlines, PNG News
The Yacht of interest that traveled from Indonesia, through Vanimo to Manus Islands is now grounded at Rabaul Yacht Club jetty in the Simpson Harbour. 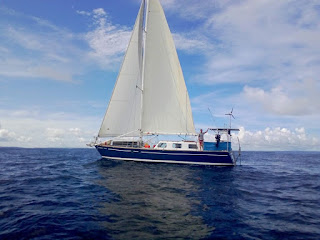 The yacht arrived at the Rabaul Simpson Harbour in the early hours of Wednesday morning.

According to police reports, the Provincial State of Emergency team comprised of police, immigration, customs, and health quarantine officers proceeded to the Rabaul Yacht Club jetty upon receiving an intel report of its arrival.

Upon their arrival, the vessel raised the Yellow flag so the Senior Quarantine Officer Peter Johnson boarded the yacht and carried out quarantine inspection on the crew and the vessel whilst all members of the Provincial Taskforce team were on the shore.

The Health quarantine officer carried out the checks and confirmed that the young Australian couple onboard showed no signs or symptoms of common cough, flu, and fever.

They were observed to be fit and healthy from the time they departed Biak Island in Indonesia.

The vessel was then cleared by health quarantine Immigration, customs, and the provincial SOE team.

The couple was instructed by the team not to disembark the vessel or sail out until the SOE lockdown is uplifted.

The couple entered the country (Manus) during the 14-days lockdown period and later sailed to Rabaul.

According to East New Britain Provincial Police Commander Chief Inspector Joseph Tabali, they both were further advised that after the SOE lockdown, they are to sail straight back to Australia.

The vessel sailed out from Biak Island Indonesia on 15th March this year heading to Rabaul, East New Britain as stated by stamped documents from an Indonesia Immigration Clearance Officer.

SOE Controller David Manning, when asked by NBC News on the matter this week said the couple is being processed and will be dealt with accordingly.

Meantime Prime Minister James Marape has issued a directive that any foreigner crossing PNG's border during this SOE period must be arrested.