The travel ban was placed in early February 2020 after the coronavirus (2019-nCov) outbreak in Wahun, China, towards the end of 2019.

Speaking to senior journalists in Honiara, Ming is very worried that this travel restriction has caused a lot of setbacks for them. 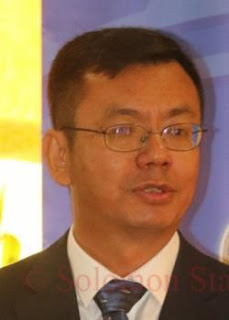 “We really need our diplomat officials to travel to Honiara so that we can resume official activities with the Solomon Islands Government,” Ming said.

When asked if Ming has already spoken to the SIG Officials, he confirmed that he has already met with the Minister for Foreign Affairs and External Trade.

“Yes, I have met with the minister and his permanent secretary (PS) and I also met with the responsible officials within the Office of the Prime Minister and Cabinet (OPMC).

“In fact, I raised our concern with the OPMC Chief of Staff in several occasions to ease the travel ban for our diplomatic officials,” Ming told journalists.

He further stressed that it’s in the best interest of the Solomon Islands to ease the travel ban because if the current status continues the country’s economy will be greatly affected.

“Not only that but we have big projects coming up and the most important one is the Pacific Games 2023,” he added.

And also the Chinese Embassy Taskforce in the Solomon Islands is working on the ground to do preparations for their Embassy Office to be opened in Honiara very soon.

Ming pointed out that maybe the virus might be persistent for one year so what is the solution for the Solomon Islands.

“You cannot just put travel ban for that long because it will affect everybody, businesses, and your economy so we have to find solutions to the businesses and economy running.

“But also we will continue to work together and remain vigilant on the virus outbreak,” he stressed.

This paper understands that China is one of the top countries that were restricted to travel to Solomon Islands.

Further, pursuant to Section 7 of the Immigration Act, 2012 a travel restriction is now enforced for travelers from the People’s Republic of China or countries with confirmed cases of the Novel Coronavirus transiting through Papua New Guinea, Fiji, Kiribati, Vanuatu, Nauru or any other Pacific countries.

The Solomon Islands also refused entry for passengers travelling from PRC through Australia. This is subject to review every 24 hours, the statement said.

The restriction ban stated that any passengers found to be making false health declarations are warned that they will be liable to criminal prosecution and may also be refused entry.


Tough battle for Vanuatu women candidates ahead of election