1/23/2020 Business, Headlines, PNG News
The P'nyang gas agreement is becoming a test case for the Marape government’s promise to stand up to resource extraction firms.

Papua New Guinea failed again in mid-January to agree fiscal terms with ExxonMobil for the development of its onshore P'nyang gas field, raising the stakes for all parties involved in a wider project to double gas exports. 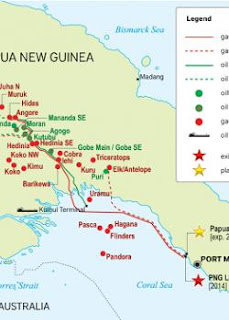 The failure of the state team negotiating in Singapore piles political pressure on the PNG government. Prime Minister James Marape rose to power last May on the back of pledges to reap more revenue from international resources firms and lift the vast South Pacific archipelago out of poverty.

It also increases the financial strain on private stakeholders. The P'nyang gas agreement needs to be sealed before a complex pre-Feed process can start for a larger associated liquefaction project, the $13bn Papua LNG, led by Total but also involving ExxonMobil and others, which is targeting FID this year and production in 2024.

PNG-based oil and gas exploration and development company Oil Search, a partner in the P'nyang (36.86pc) and Papua LNG (17.7pc) projects, stated last October that the delays meant it reduced capex on the project by 15pc last year, while noting engineering work and marketing cannot get underway until the talks progress.

ExxonMobil refused a deal offered by oil minister Kerenga Kua at the first round of talks last November. Kua said this was “disappointing”, claiming the terms, which remain confidential, were in line with similar extraction arrangements in place in Indonesia and Malaysia.

Fresh from disappointing renegotiations with Total, PNG wants benefits that are “far greater than Papua LNG” and is seeking “a good deal, not a fast deal”, the negotiating team stated.

“In the P’nyang talks, the government appears to be seeking a better tax take, more local content and jobs opportunities, more project information from the operator, and a firm commitment to development of P'nyang in a defined timeframe,” says Credit Suisse analyst Saul Kavonic.

P’nyang, which is estimated to hold 4.4tn ft³ of gas in the West Highlands province, would support an additional train at the Papua LNG project (Total will supply the other two from separate fields). Each of the three trains will have capacity to produce 2.7mn t/yr. Once operational these would double PNG’s 2020 LNG exports, which are all produced at ExxonMobil's PNG LNG facility at Caution Bay. Papua LNG is planned to share certain brownfield facilities as well as feedgas and export facilities with PNG LNG.

PNG expert Colin Filer, of the Australian National University's College of Asia and the Pacific, says ExxonMobil is “playing hard ball” because the projects are such a small part of its global portfolio. “It believes it can hold the PNG government's feet to the fire, because of its fiscal woes”.

Australian bank ANZ stated in December that the lack of a P’nyang breakthrough will delay the forecast national economic recovery by 12 months.

“A longer project dialogue will push the recovery out further, with a risk that extended negotiations could derail the economic upturn.”

The government also faces the ongoing threat of local resistance from Western Highlands landowners. Regional leaders stated on 21 January that they had withdrawn their support for the agreement as it has “not incorporated their interests”.

Papua LNG also faces a wave of global competitors targeting an anticipated spike in demand for LNG in the mid-2020s that may or may not materialise. “A P’nyang gas agreement remains a precursor to the entire PNG LNG expansion project, which is competing for a rapidly narrowing market opening later this decade,” says Kavonic.