11/27/2019 Headlines, Pacific News, Vanuatu news
Vanuatu Opposition bloc have boycotted the second extraordinary sitting of Parliament and urged Speaker of Parliament, Simeon Seule to step aside and allow one of the Deputy Speakers to act on his behalf until the court makes a ruling on his case. 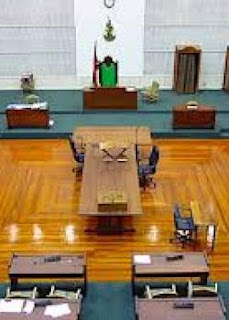 When parliament resumed business Tuesday,Kalsakau called on the Speaker of Parliament to step aside and allow one of the Deputy Speakers to act on his behalf, pending the outcome of the Speaker’s case before the court. He explained this is to protect and uphold the integrity of the parliament and the MPs.

In response, Speaker Seule quoted the relevant sections of the Constitution in both English and French and said “until proven guilty” he will maintain the position as the Speaker of Parliament. He said the parliament is “not a court” to discuss his case.

When pressed to adjourn the parliament sitting and seek legal advice, the Speaker adjourned parliament and sought the advice of the State Law Office on the matter. Shortly after he reconvened parliament and said the advice received is that unless and until proven guilty by the court, under the relevant sections of the Constitution, he will continue to maintain his position as Speaker of the national parliament. He then called on parliament to continue business on the agenda for the Second Extraordinary Session.

In the meantime, the Opposition group remained outside in protest and told the Daily Post they will continue the protest until Speaker Seule steps aside and wait for the court verdict on his case.

But Speaker Seule maintains the provisions in the Constitution states that he will not step aside until the court makes a decision. As such he continued with normal parliamentary business, while the Opposition maintained their protest.

“It’s the integrity of the parliament and all MPs that we are concern about, it is not about his court case,” the Leader of Opposition said.

“He cannot serve the country and at the same time fight his own case in court. He must step aside and wait for the outcome of the court, which is honorable and it will also preserve the integrity of the national parliament.

“It reflects badly on parliament and all MPs when the Speaker is fighting his case in court and at the same time continues to remain as Speaker of the national parliament, and also at the same time act as the Head of State whenever the President is absent. It is the national integrity that we in the Opposition are concern about.”

The Opposition group also said the government should realize its call to preserve the integrity of the parliament and all MPs and should support the Opposition in calling on the Speaker to step aside until the court decides on his case.

Opposition Leader added that: “We are the lawmakers, and as such must defend the integrity of the parliament, MPs and the nation,” he said.

The Opposition group claims to have 22 MPs on its side. Three of its MPs were present in parliament Tuesday morning and during the afternoon sessions. They are MPs Toara Daniel, Hosea Nevu, and Jacob Mata. They told the Daily Post they will continue to attend the parliament sittings because they represent their people in the 11th Legislature.