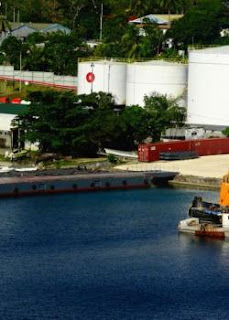 The much talked about Fisheries Plant, which initially started around 2002 to 2003 came to a standstill for many years, raising doubts as to whether the plant will one day ever work and achieve its objectives and goals is finally opening its doors and starting its operations as of today.

The fishing industry development in Vanuatu has been dormant since the closure of Palekula Fishing Base operations in 1987. There is still fish in the ocean but the country lacks the capacity to extract the fish and turn it into a commodity.

According to a Department of Fisheries’ brief on Sino-Van Fisheries Ltd’s Chronology of events, in 2004, CNFC Overseas Fishery Company Ltd and Vanuatu Government signed the first Fisheries Co-operation Framework, which paved way for the creation of a Joint Venture Agreement (JVA). The Prime Minster who signed this agreement was Maxime Carlot Korman.

The very first Government leader who signed the first Joint Venture Agreement (JVA) was former Prime Minister, Barak Tame Sope Ma’autamate who initiated discussions with the Chinese Government to revive Vanuatu’s fishing industry and utilize fish resources to support national economic development. The approach was to bring to the table the fishing nations who are able to extract fish from Vanuatu's EEZ to provide this economic benefit.

Former Prime Minister Sope signed the JFA on behalf of the Vanuatu Government with the CNFRC on 25 October 2005, 15 years ago from today. CNFRC is the shareholder in the Sino-Van company.

In 2006, the Government then signed a supplementary agreement with CNFC for the use of the Fisheries Department wharf development. Development did not proceed because shallow waters at Seafront and South of Iririki Island prevented large vessels coming in.

According to the Director of Fisheries, William Naviti, in 2008, a joint venture company Sino-Van Fisheries Ltd was established. Former Director General, Jeffrey Wilfred signed the agreement on behalf of the Minister of Agriculture and the Government.

Naviti said by 2008 and 2009, the Vanuatu Government was ready and committed by handing contributing of its share of the bargain which was the piece of land which it had acquired and leased from the Vanuatu Livestock Development (VLD). This piece of land, which is around five hectares, covers the wastewater sewage pond.

“The Government had already by then handed over as part of its ratio of 49% shares, the land space and the fish processing plant as part of the joint venture deal it has with CNFC,” he said.

In 2017, a Council of Minister (COM)’s paper on the relocation of the Vanuatu Fisheries Department (VFD) taken to COM to be endorsed. The Business Agreement was enforced upon the COM decision. The COM paper agrees for preferential treatment for new wharf and extension of factory. There was an Entrusting Agreement between Sino-Van and CNFC.

Director Naviti said in 2018 through the leadership of the current Minister of Agriculture, Livestock, Forestry, Fisheries and Biosecurity, Matai Seremaiah, a VT1 billion was negotiated and secured as a part of the joint venture share agreement to come from CNFC to kick start work and operation of Sino-Van.

He said these funds came in to enable Sino-Van for the first time to start work building pontoons, construction of two warehouses as well as refurbishment of the factor and processing plant to meet the export standard.