10/28/2019 Headlines, Pacific News, Vanuatu news
Not all ni-Vanuatu women leaders support the call for Members of Parliament to pass a Bill on Temporary Special Measures (TSM) for quotas or reserve seats for 50 percent women in Parliament, which will be presented to the government after a march today. 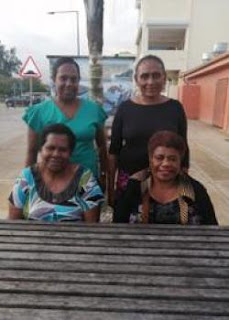 “We, some of the women who are currently affiliated in different political parties do not support the march and petition which will be presented to our MPs,” Jenny Ligo (Coalition for Gender Equality); Merelyn Abel (Chief Executive Officer for Vanua’aku Pati); Manina Packete (Women Leader); and Vanessa Molisa (Vice president of PENAMA Vavine Bulu Association) made this clear in response to the  petition published by Daily Post Monday.

“As women leaders, we are calling on all political parties not to accept a petition spearheaded by an NGO.

“We are calling on the Minister of Internal Affairs, Andrew Napuat to preserve the sovereignty of this nation. Reserve seats have existed (TSM in Municipal councils) for two terms. We are calling on our leaders to stop the reserve seat measure and encourage women to get involved in their respective political parties.”

They accused Oxfam of interfering in Vanuatu politics and urged Minister Napuat to look at Oxfam’s status in the country.

The group added after the creation and launching of the women’s political party, women shouldn’t be asking for 50 percent reserve seats in Parliament.

“Women should contest in the open seats as every other citizen. There is no exemption,” they concluded.

But he points out that his party’s vision has always been to start at municipality level stressing that it is an educational process. “Both men and women voters must be able to accept this new initiative at Municipal level first by working successfully together, before it can be introduced at Provincial Council level then eventually at National General Election level”, he said.

“I remember that at the beginning it was difficult and we had to lobby to explain the idea to the voters to understand that women also have their right to contribute towards the political development of the country and we also have our customs where women have their own place and men have theirs so it was not easy but eventually we made it possible for women to have their own reserve seats at Municipal level.

“At the time the idea was to allow the male councillors to recognise the relevance of having women participate at Municipal Council level. Then the next step was to introduce reserve seats at Provincial Council level. Once this was achieved and recognised as the way to go then to finally take it to National Polls to provide the avenue for women to become Members of Parliament”.

Today the challenge is still there but the former MP says it all requires “education” to help male voters to have confidence in women (to vote for them and work with them).

Asked if Carcasses personally had confidence in women which prompted his party to introduce the reserve seat initiative, he replied, “Well take a look in the home where husbands and wives cooperate to manage their families. Women are the best supervisors anyway so there you go”.

Asked how far he can indulge in politics, he replied, “Well, I’ve served and completed my full term (in prison) and I am now a free man. This is why I was elected President of Green Confederation (Party).

“I am allowed to indulge in politics except that I am not allowed to become an MP for the next ten years,” he said.