9/12/2019 Headlines, PNG News
PNG  Prime Minister James Marape says there must be a national reconciliation ceremony between the National Government and people of Autonomous Region of Bougainville. 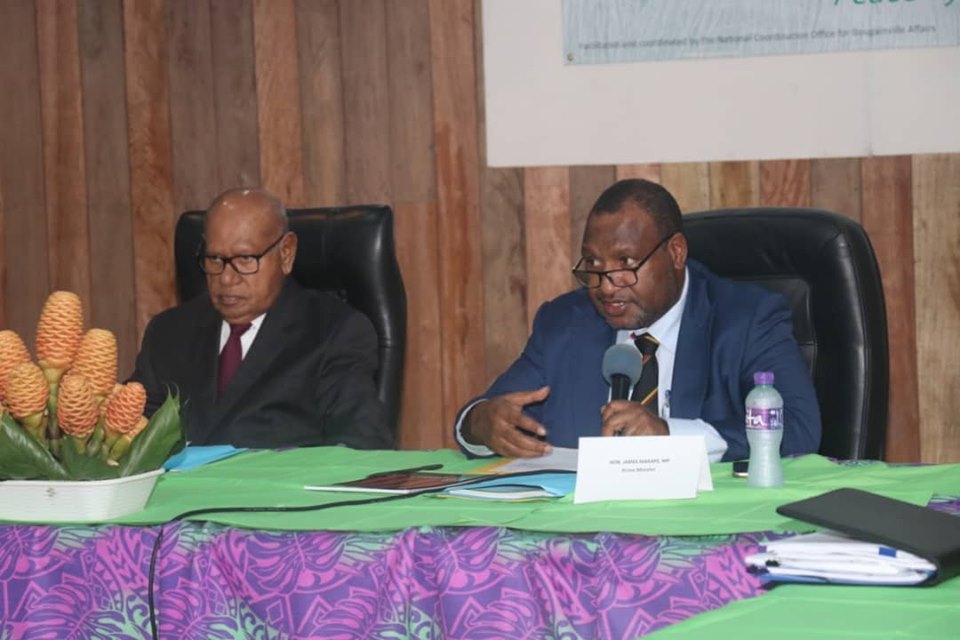 He said the National Government will support the wishes and aspirations of the ABG in determining their political future through the referendum.

‘’With 70 days remaining before the voting for the referendum taking place we have to affirm our combined efforts on the outcomes as per the Bougainville Peace Agreement.

“We will ensure that every arrangement is in place and our national government is fully committed within the constraints of our resource envelope and ability to help Bougainville.

“We are giving you the fullest support and that there is no impediment along the way.

“The just concluded meeting of this JSB here on Buka is so important to ensure that everything that needs to be done is done to ensure the outcome of the Bougainville referendum is successful and satisfactory,’’ said Prime Minister Marape.

He said that leaders on both sides must ensure that there is safety and security not only on Bougainville but in PNG as well.

“Internal security is our number one priority.

“There are guns and weapons amongst us and we need to ensure the weapons are disposed.

“The Bougainville Peace Agreement speaks for weapons to be disposed so that the people can hold the referendum without any form of threats.

“Our National Government intends to look into the issue of weapons in its totality.

“Weapons disposal has been one of the key fundamental pillars of the peace agreement,’’ he said.

The Prime Minister said both the National Government and the ABG should move on with the proposed National Reconciliation Ceremony.

“You lost more lives on this side of the Bismarck and we also lost lives on the other side.

“We must also agree and ensure there is a heart to heart reconciliation process.

“We can't take for granted our people's good will. People have given us their good will for us leaders to work with them.
‘I am suggesting a Christian Church led reconciliation process here,’’ said Prime Minister Marape.

He also addressed the JSB that the other most important issue is how to manage the post referendum issues.

“There needs to be a greater detailed work by both sides of the agreement and the two governments need to drive the post referendum results.

“We as leaders must use our Melanesian way of resolving conflicts.

“Long before there was a formal court process and western ideas introduced we had a structured society to resolving conflicts with our Melanesian way.

“Simply put there must be a local solution to these issues and we must have a home grown solution.

“We must always have faith that our Bougainville Peace Agreement has stood the test of time.

“No single shot has been fired since 2001 and no single life has been lost,’’ said Prime Minister Marape.

Prime Minister Marape said the National Government may have not fully fulfilled some of the commitments and things as per the peace agreement but it has tried its best.

“The National Government will now have to ensure the referendum is held successfully and I am pleased to see that we are now referendum ready’’.