The Pacific nation of Kiribati will formally signed diplomatic relations with China Friday local time after the country decided last week to switch allegiance from Taiwan. 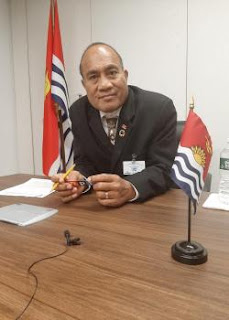 This was confirmed by Kiribati President Taneti Maamau at a press conference with Pacific media in New York.

“Tomorrow I’ll be signing that here in New York with my counterpart from Beijing, said President Maamau.

President Maamau said the switch to China is not about dollar diplomacy but for the development needs of the people.

“The reason was very clear. We have a Kiribati vision in place for 20 years. The main clear message for these policies is to improve the livelihood of our people, to make Kiribati a wealthy, healthy and secure place.

“We have worked with Taiwan for more than three years now but it didn’t work out in some of the major projects, with Taiwan not forth coming in the way we would want. We can’t wait, we need to move on and make a decision. We thought China was a big power with much more resources and we need to work with a partner not only with our domestic issues but also with global issues,” President explained to the Pacific media team in New York.

He admitted the switch from Taiwan to China was painful because it was the mandate of the people during the election campaign.

President Maamau downplayed suggestions that Kiribati could fall into a debt trap if the country switched diplomatic ties to China and accepted its development aid.

“It depends on the economic and financial situation the country is facing. Right now, I don’t contemplate the government going in that direction. Our debt policies very clear and we have been commended by IMF and World Bank as one of the most prudent countries in terms of financial management in the Pacific.

“As you may aware, we have also reserved funds that can help sustain our financial instability, if the situation comes up. We need to be careful and take good precaution.

"In our system we have our loan and currency act and it’s very hard to go for loans. It's not that simple, it has to go through Parliament,” President Mamau explained.

China and Taiwan have fought a tug-of-war for diplomatic recognition in the South Pacific for decades, with some island nations switching allegiances for financial gain and in return for support in international forums like the United Nations.

The Pacific has been a diplomatic stronghold for Taiwan, where it has formal ties with six of the 16 Pacific Islands Forum nations.

This month Solomon Islands and Kiribati cut off diplomatic ties with Taiwan and vowed to adhere to the One China policy.

Pita Ligaiula’s coverage of the United Nations General Assembly is made possible with funding support from the Pacific Islands Forum Secretariat.