8/27/2019 Headlines, PNG News
Transforming Papua New Guinea to become the food basket of the Asia Pacific region is a vision embarked on by the government. 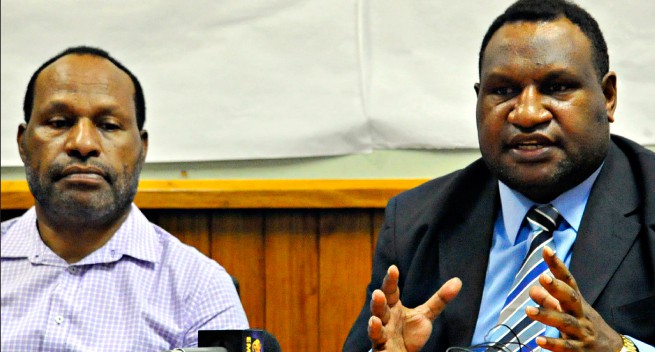 Prime Minister James Marape said this in his talk during the official opening of the multi-million kina Fresh Produce Development Authority building in Goroka last Friday.

Marape said the government in partnership with agricultural agencies will have to ensure that agriculture is commercialised and fresh produce from PNG gets out onto the international markets, making agriculture the biggest export earner.

He made a commitment to make available K200 million(US$58 million) annually for the next 10 years starting next year
.
“This year’s budget is the O’Neill budget and the Marape budget starting next year will look at supporting agriculture seriously,” Marape said.

Before the government funding next year,Marape said he will visit all agricultural agencies like FPDA, CIC, NARI and others to view their submissions to see where government input comes in.

“I want those of you in the agriculture space to tell me your game plan and as government, we will make the funds available and get the right resources for you,” he said.

“We will create special economic enclaves which will improve agricultural productivity, there is land outside of Goroka town, the Waghi valley, the Sepik plains, the Ramu plains and the Markham plains, all these areas must be converted into commercial agricultural zones.

“This dream can come true, and for those of you that have been in this sector for so long, I can say that you have been operating below 30 per cent and your imaginations have not reached the sky.

“I want PNG to be the food basket of the Asia Pacific so when we are hit by climate change, industrialisation and population boom, we will supply food to our neighbours.”

Stats presented by the Prime Minister indicate that agriculture is currently under 30 per cent of PNG’s revenue unlike the yesteryears when it was more than 70 per cent.

“We have regressed in agriculture so we have to reverse the trend and allow agriculture to regain its status as the biggest export earner.”

“Countries like the Philippines have 110 million people and China about 1.4 billion and all of them need to eat food,” he said.

“In a world where population is growing at an alarming rate, 50 per cent of land in PNG can be channeled into special agricultural zones.

“The majority of Papua New Guineans are exposed to agriculture and not every day we need oil, gas and gold but we need food every day.

“I want our people to put their hands back into the land and take up agriculture because in PNG, we (people) are blessed to own the land.”

Marape also revealed the deadline of when he wants to see PNG become the food basket of the Asia Pacific.

“By 2025 when we commemorate our 50th anniversary as an independent state, we should no longer import food that we can produce in our country and that includes rice,” he said.

“Our country is food sufficient but we are still importing rice, beef lamb but this will come to an end.”
Stats from research presented to Marape show that agriculture in PNG alone has a domestic market of K5 million(US$1.4 million) annually to companies in Port Moresby and Lae, however, his government targets to hit the international markets in the Asia Pacific and beyond.

“Let’s start working now so by 2025, we have a standard and policy to export outside of PNG,” he said.