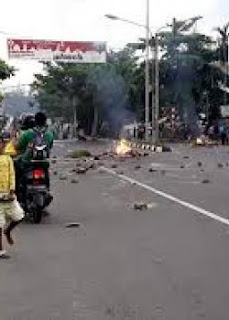 “On behalf of the people of East Java, I would like apologiSe to all Papuans as the racial abuse incident in Surabaya last week had caused outrage in Jayapura and Manokwari,” Khohifah said on Monday.

The governor said that she had personally called Papua Governor Lukas Enembe to extend her apology for the ill treatment of Papuan students in East Java, which led thousands of Papuans to take to the streets.

Protests broke out on Monday morning in several cities across the two provinces, including in the Papuan town of Jayapura and the West Papuan cities of Manokwari and Sorong.

The protesters responded to an incident on Sunday when Papuan students living in a dormitory in Surabaya were subjected to physical and verbal violence by security officers and members of mass organisations, who accused the Papuans of refusing to celebrate Indonesia’s 74th Independence Day over the weekend.

They stormed the dormitory after they apparently found a discarded Indonesian flag near the building. Some security personnel reportedly shouted curse words such as “monkeys” and “dogs”. The mob later threw stones at the dorm while shouting “Kick out the Papuans!” and “Slaughter the Papuans!” for hours.

National Police chief Gen. Tito Karnavian, who accompanied Khofifah when she delivered her apology, said the situation in the cities where the protests had broken out was now under control.

“I’ve heard that the authorities have managed to control the protesters. We are ready to send more officers from Maluku and Sulawesi but only if necessary,” said Tito.

Khofifah said the discriminatory remarks by a few individuals did not reflect the province’s tolerance and acceptance of Papuans who live there.

She also guaranteed the safety and well-being of all Papuan students in Surabaya.

“I would like to invite all Papuan students to continue studying at our universities. The police will ensure that you will all be safe,” she said