Call for Apology for Racial Slur against Miss Pacific Islands

Papua New Guineans have taken to social media, calling for an official apology from organizers of a Tongan beauty pageant after a guest at the event reportedly made racial comments against current Miss Pacific Islands – Leoshina Kariha. 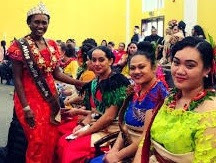 Miss Kariha has been in the Tongan capital of Nuku'alofa since Wednesday to attend the Heilala Festival and crowning of Miss Heilala.

The Heilala Festival, named after Tonga's national flower, is organized by the Tonga Visitors Bureau and the Tonga Tourist Association.

The winner of the pageant goes on to represent Tonga in the Miss Pacific Islands Pageant.

It is reported that as the 19 year old Kariha was concluding her speech during the crowning night on Friday, someone yelled out "YOU'RE BLACK AND UGLY, DISGUSTING" from the VIP stand as well as Booing from the crowd.

Despite numerous requests made from Papua New Guineans on the pageants official page since yesterday morning, no official apology has been made yet by organizers.

With the issue trending on social media, the young Pacific Island Queen has posted on her Facebook account saying as quoted “I can't change who I am or the colour of my skin. I am just fulfilling God's plan and for that I am happy, God bless you my beautiful country and region.”
SHARE THIS
Share it Tweet Share it Share it Pin it