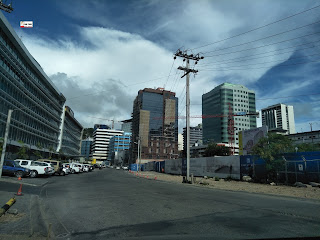 “I need the report to understand how public funds were spent on those vehicles. When I fully understand the report and the issues, the appropriate action, if any, can be taken,” he added.

Kramer said the queries and issues could then be raised with those involved in the procurement exercise, and the matter discussed in the National Executive Council (NEC).

“From the responses to our queries, we can establish whether the procurement was conducted above board. At the moment, I don’t have any information or evidence to suggest that there was any wrongdoing.

“If we start chasing these issues without the report, we will be running around like looking into rabbit holes (wasting time and responses in investigating),” he added.

Kramer also said that he would file a complaint with the police to facilitate investigations into the procurement process.

“There are also other issues, like allegations that the National Capital District Commission awarded K3 million annually for a yoga programme without following proper procurement process.

“I will, in my capacity as the police minister, file the complaints that I have been holding on for some time.

“It is for the police to investigate and act accordingly. Not me, I don’t have the power to investigate.”
Kramer said: “When you procure things from overseas without following the Public Finance Act, you break the law. It doesn’t necessarily mean that it is a criminal offence.

“So you have to understand that (the issue is whether) anyone benefitted from the transactions. So you look at the purchasing price and see the tender process.

“You check the tender price and initial process and whether there was any eventual inconsistency in the tender bids. If something is supposed to cost only K5,000 (US$1,477) and we ended up buying it for K25,000 (US$7,387), then you have an issue.”

“I will file whatever necessary complaints that I have. Likewise, any Member of Parliament or the public can lodge police reports if you suspect that a crime had been committed,” Kramer said.

In January, then APEC Minister Justin Tkatchenko told Parliament that the full APEC report had been delayed by the Ombudsman Commission (OC).

“We are going through a detailed process to ensure that the full report is tabled in Parliament on the details of the Apec outcomes and also how the Apec expenditure was expended and the final amount of money that was spent,” Tkatchenko had said.

“This is delayed because Moresby North West MP Sir Mekere Morauta complained to the OC about the vehicles and other things that were supposedly purchased for APEC.

“The OC had ordered a stop to all of these processes until they completed their investigations.

“The process is going forward and we will have a report and it will completely show that the Apec summit was an absolute success and was not K5 billion (US$1.4 billion) as Sir Mekere claimed.” .