6/10/2019 Headlines, PNG News
Papua New Guinea OPPOSITION Leader Patrick Pruaitch, pictured, is concerned that the new Government led by Prime Minister James Marape may not be willing to make the necessary changes to policies for the country going forward.
Pruaitch, who congratulated Marape on the announcement of a 33-member Cabinet on Friday, said the nation was hoping it would signal a change in policy direction.
But he feared the events of the past weeks and months had been initiated only to remove Peter O’Neill as prime minister. 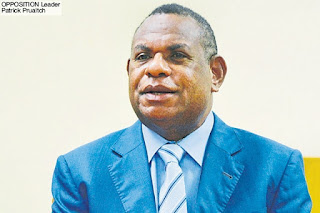 Pruaitch said there were two recent instances which showed that the change was in name only. One was Marape leaving the Laguna camp with 28 MPs to forge an alliance with O’Neill’s People National Congress Party and other coalition partners.
The other is Marape promising the Opposition four Cabinet posts but gave only two.
“During recent discussions with Marape and his team, it has become clear that they have no specific plans about policy changes they want to immediately implement,” Pruaitch said.
“It now appears the main reason they wanted to oust O’Neill was to impose a different style of leadership but with no substantial change in policy direction.”
He said the Opposition had plans to immediately address the nation’s depressed economic conditions, and to restore employment growth.
“We accept our fate to remain as members of the Opposition for the remainder of this term in Parliament and we intend to play our role on behalf of the people to keep the Government honest and accountable to their promises.”
“The Prime Minister in recent days has had much to say about corruption. In the coming weeks, months and years the nation will judge whether these words lead to meaningful actions and whether the Marape Government was capable of rectifying the economic mismanagement of the O’Neill Government.
“The Opposition is of the view that this is the same PNC Government, but with a different PM.
“Hence there will be no policy initiatives by the Government.
The National/ONE PNG/ Press Release
SHARE THIS
Share it Tweet Share it Share it Pin it