5/24/2019 Pacific News, Samoa News
The African, Caribbean and Pacific (ACP) Council of Ministers meeting in Brussels this week has unanimously approved Samoa’s bid to host the signing of the new agreement with the European Union to replace the Cotonou Agreement in 2020.

The announcement was made this afternoon by the Samoan Government through a press statement released from the Government Press Secretariat.

Four other countries also competed for the right to host the signing ceremony. 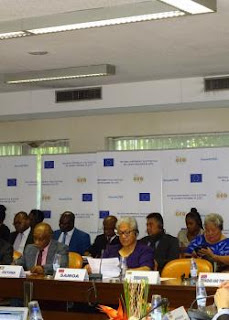 Thanking the Council of Ministers, Samoan Deputy Prime Minister, Fiame Naomi Mata’afa assured the 79 member countries of the ACP that Samoa, representing the Pacific will not disappoint in its preparations for the signing, likely to be in 2020, when the current life of the Cotonou Agreement expires.

“The Pacific region has always been conscious of its role and place within our family. We have played our part and where appropriate demonstrate our full and unconditional commitment and support of our Group.

“On behalf of my Prime Minister and the people of Samoa, I therefore wish to thank all member states of the ACP family, most sincerely, for your support.  The approval of Council is a clear demonstration of the unity and solidarity of our Group and augurs well for the serious business ahead as we move to conclude our negotiations with the EU, said DPM Mata’afa.

She said Samoa and the Pacific looks forward to welcoming all ACP countries and the EU to Apia for the signing.

“Let me assure you all that Samoa will not disappoint in its preparations for the signing ceremony.  I said this in the full knowledge and confidence in the undertaking made by Samoa’s Prime Minister, when he appeared before the Committee of Ambassadors in April last year.  We look forward to welcoming you all and for the opportunity to demonstrate Samoan hospitality for which we are known in the Pacific region.

“Let me also acknowledge with gratitude the support of the Pacific member states and in particular Fiji in our collective efforts to secure the signing ceremony in the Pacific region, said Mata’afa.

The Deputy Prime Minister was accompanied by CEO Peseta Noumea Simi and Ambassador Fatumanava III Luteru to the Council and the ACP Ministerial Central Negotiating Group.

The ACP Group comprise of 48 African, 16 the Caribbean and 15 Pacific sovereign independent states with its headquarters based in Brussels.

The Council is the policy making body of the Group and meets twice annually to give guidance to the Committee of Ambassadors and take decisions relating to the effective management of its relations with the EU.  The EU’s total financial support under the Cotonou Agreement is over 30 billion euros covering national, regional and intra-ACP programmes and projects.