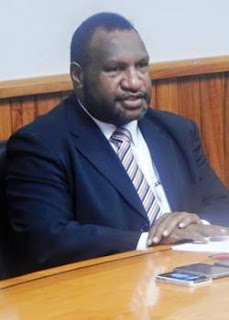 He said O’Neill no longer had trust in him and he felt he had to move on.

Marape, the Member for Tari-Pori, who had been a loyal cabinet minister, told a news conference at his Vulupindi Haus office at Waigani yesterday that he wanted to spend more time in his electorate.

But he remained with the Government and was still a member of O’Neill’s ruling People’s National Congress Party.

The Leader of Government Business, who also shocked Finance Department staff in his address to them after the news conference, said that the level of trust between him and the Prime Minister was at its lowest and that he wanted to make way for the head of the country to work with those he trusted.

“This is a surprise to me but I felt that sometimes this sort of thing needs to be made. There had been inferences in the social media and everywhere that I had been sacked and sidelined and all these sorts of things. I just felt that instability for this government is not proper and if some of us are the cause of instability for the Prime Minister to function properly then he needs to get some of us, who he feels are not trustworthy, out,” Marape said.

“It is with regret that I announce my resignation as Minister of State in the O’Neill Government. Since July 2012, I have been conferred by Prime Minister Peter O’Neill this high privilege to serve my country Papua New Guinea as Minister for Finance and Leader of Government’s Parliamentary Business, but today I resign from these occupations,” he said.

“Nothing personal, the country is bigger than me … there are other equally qualified Members of Parliament who can fit in this position as Minister of Finance.

“Prime Minister is running this government and his Cabinet, he is better off running the country his way than some of us, we offer policy advises, we offer advises how we feel where issues of the country needs to be addressed but he disregards many of our advises in most instances so some of us must make way so that he can find other candidates who are compatible to his way of thinking,” Marape said.

He said this was not an easy decision to make and despite cultural and personal ties, the level of trust between him and the Prime Minister was at the “lowest after his office and associates continue to send negative signals on their lack of trust on me”, he said.

“While we don’t have any personal differences, we do differ on some work and policy-related matters; these includes policies like whether getting more local content participation in our gas, oil sector, or mining industry, or on the empowerment of our local businesses; or on resource laws reconfiguration for wealth generation for our country, or for lack of honouring existing resource projects agreements like the 4.27 per cent of Kroton shares for five provincial governments and their landowners, and other issues.

“I have raised my views and concerns on those areas yet I have come to realise that most of my advices find no traction and is non-compatible with Prime Minister’s world view, thus it is only fitting that I exit Cabinet.

“I am not in cabinet for its comforts but to contribute to national development and having completed some reforms in Finance Department over the last seven years including better expenditure control mechanism as well as setting up my signature reform in procurement laws that includes local content emphasis, I feel the time is now right for me to move out of Cabinet so that fresh minds can come in,” he said.

“It will be remiss of me not to apologise to my colleagues in Parliament, family and friends, my staff and all my people of Pori-Tari and Hela for surprising you all with this sudden announcement.

“I thank Prime Minister O’Neill for the opportunity to serve in his Cabinet and wish him all the very best as he tries to guide our country in such continual hard times, some of which are natural hard times, some are man-made. With this I hereby resign as Minister of State but I look forward to serving the country as a Member of a Parliament,” Marape said.

He told the Post-Courier last night from Namatanai, New Ireland Province, that he had not heard from Mr Marape and had not received the official resignation letter because he was out of Port Moresby when news reached him.

O’Neill, who stayed in Namatanai last night after the launch of the Boluminski Highway when the resignation news reached him, said he would resume the Finance Ministry while an announcement would be made soon after consulting the coalition.

“I accept the verbal resignation of James Marape as a Minister of State,” O’Neill said.

“He has been a Minister since he was first elected as a Member of Parliament. This commitment has presented challenges at the district level and he has not spent enough time with his electorate and on issues that are close to his people.

“We are all elected as local Members first and foremost, and our districts and provinces require great attention for us to ensure improving levels of service delivery.

“I have not heard from the Minister today, as a matter of protocol, I expect he will be in contact soon to convey his intentions.

“While his resignation is unfortunate, Government wok mas go yet,” he ended with Tok-Pisin.