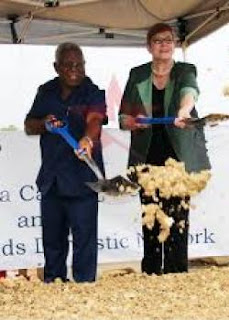 “This is a tangible symbol of our ongoing commitment to the Solomon Islands and the Pacific,” she added.

Both leaders further highlighted that this ‘game-changing’ infrastructure will be transformative for Solomon Islands nation as a whole.

It is understood that since the signing of a AUD$137 million (US$99 million) contract with Vocus in June 2018, construction of the Coral Sea Cable System and Solomon Islands Domestic Network has progressed well.

Additional cable landing stations will be built for the Solomon Islands Domestic Network, which will link up the rest of the country connecting Honiara with provincial hubs in Auki, Noro and Taro.

The Coral Sea Cable will supply a capacity approximately 30,000 times the current demand.

Hou confidently stated that this will be a big boost for the country’s economic growth and country’s development journey into the future.

“This project is a critical infrastructure that will no doubt bring the government closer to its people.

“It will redefine Solomon Islands development and nation building process,” Hou said during the ceremony.

But Foreign Affairs Minister Payne admitted that while the cable offers many opportunities, it comes with some challenges.

She said Australia is working closely with the Solomon Islands government and the World Bank to maximise the benefits and reduce the risks of this flagship project.