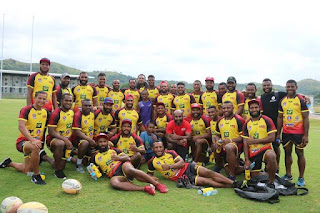 The SP PNG Hunters team for the 2019 season has been finalized.

Competition for spots is expected to be strong with a large squad, however with the overall experience deficit in the Hunters, senior players are likely to be the first choice selections.

Adex Wera, Bland Abavu, Enoch Maki and Stanton Albert have spent the most time in the Hunters while Dilbert Isaac, McKenzie Yei and Junior Rau are all proven performers.

The 2019 Hunters squad in alphabetical order are:

The Hunters have released a total of 8 players - the largest export to overseas club's since its inception into the Intrust Super Cup, which includes Stargroth Amean, Wartovo Pauara Junior and Willie Minoga to the Barrow Raiders (in England), brothers, Ase and Watson Boas, and Thompson Teteh to the Featherstone Rovers (in England), and Edene Gabbie and Rhadley Brawa to the Wynumm Manly Seagulls.