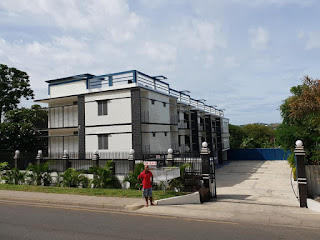 The opening of a four-storey landmark shopping mall at Gordons business centre in the Nation’s capital is an indication that investment confidence has never been swayed by its bad history.

The place was infested with crimes and street violence which has been reduced and it continues to top Governor Powes Parkop’s priority list.

Desh Besh Enterprises Limited (DBEL) added the shop, which was built at a cost of K12 million, to its business empire in the city late last year when it opened its doors for business last December.

Governor Parkop was on hand to cut the ribbon for the building then.

The building houses a wholesale and retail shop on the ground floor, a department shop on the second, whilst the third and the fourth are store

In the area alone, there are three others under its belt and they include a service station and two other retail and wholesale shops.

Managing Director, Mohammed Abdul Wahed told City Sivarai on February 07 that he decided to make the investment in the area to improve its landscape and, the city dwellers’ attitude and thinking.

“That is why I invested here. Our customers are really happy and feel better to shop in a luxury shop,” he said.

He said he has plans to further improve the landscape of the area when he replaces the facilities of the service station and one of the shops which are within the same precinct.

Abdul started growing his business empire from a humble beginning. He entered the country as a Mathematics and Science teacher at Dela’Sell Maino Hana High School and was later transferred to Kwikila High School in Central province 30 years ago.

He ventured into a fast food company and the rest is now history. He now solely owns apartments, 30 hectares of land for poultry and agriculture, supermarkets, bakeries, container yard, fast food outlets, fleet of vehicles for transportation and logistics and service stations.

His three-storey apartment (pictured) at East Boroko is another landmark building which took the landscape of the suburb to a new ground. It was built by a Bangladesh engineer with his country’s architecture and designs. It has nine units with four parking spaces each and wide space within the parameter for recreation and leisure.

He is now a naturalised citizen of PNG. That means Port Moresby is a global city which is a home to multinational and multi-cultural residents.

According to him, his company is doing its bit to share and achieve the bigger vision Governor Parkop has to make Port Moresby liveable, inclusive, prosperous, great, safe, smart and peaceful.

“Port Moresby is our home. We will continue to grow our business and create more employment for our fellow citizens. We are now employing over 450 locals in our wide range of business,” he said.

Whilst officiating at the opening ceremony, Governor Parkop commended them for investing back in the city, saying every other company should emulate from DBEL by creating jobs for the people and improve the landscape of the city.

There is a strong presence of other companies as well in the area to align their investment choices and visions with the governor and the municipal authority’s.

They have also done renovations to the old buildings which house their shops to improve the landscape of the area complementing the public-private investments taking place there.

The most notable one is the redevelopment of the modern Gordons Super Market which is being constructed at the cost of K30 million of which K15 million each was sourced from the New Zealand Government and the NCDC respectively.

These developments have been further complemented by volunteers who are members of the Active City Development program which was sanctioned by the International Olympic Committee.

All these tools are used to bring developmental and behavioral change to individuals and communities at Gordons and in other parts of the city that is safe, sustainable, inclusive and accessible using physical activity.

As part of the clean-up activity, they clean the shop fronts and bus stops every night. The effort has been reinforced by the presence of bus stop wardens.

The safety and cleanliness of the other parts of city is also owed to them. The program has generated active and physical activities amongst them to embrace a healthy lifestyle and to create a city that inspires and motivates the entire nation to secure a brighter future.

Gordons, more or less a nerve centre of the city, needs collective efforts of all stakeholders including the residents to make it become the place everyone wishes to see now and into the future.
SHARE THIS
Share it Tweet Share it Share it Pin it