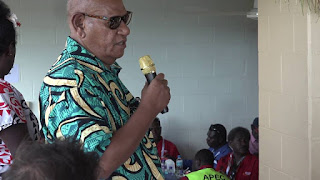 Bougainville Copper Limited (BCL) has serious concerns over the proposed new mining laws that some members of the Autonomous Bougainville Government (ABG) seem keen to rush through parliament.
The three bills that were introduced to parliament last Wednesday, with insufficient stakeholder consultation, are proving divisive at a time when unity is required in the lead-up to the referendum.
If passed, one of the bills seeks to amend the Bougainville Mining Act 2015 to allow a new company, Bougainville Advance Mining Limited, to be issued with a special mining licence granting “large-scale mining leases over all land in Bougainville available for reconnaissance, exploration and mining that is not subject to an existing exploration licence or mining lease”. Leases of up to 100 years could be granted.
These bills mirror proposals put forward by an Australian Jeffery McGlinn, whose apparent primary business appears to be horse breeding. In presentations to MPs and others he has proposed a 40 per cent stake in Bougainville Advance Mining for his own newly formed company Caballus Mining with other unknown foreign investors and sovereign states.
These developments raise very legitimate legal, constitutional and ethical questions, not only by BCL and its shareholders, but also by landowners in Bougainville and others in the community. More widely these bills could also be interpreted as both anti-competitive and anti-investment which is the last thing Bougainville needs.
BCL urges ABG leaders to think very seriously about the unnecessary divisions being created by these proposed amendments to the Mining Act and instead re-focus on the important work of unifying landowners and Bougainvilleans at this critical time for Bougainville, as they prepare for the referendum.
From the company’s own perspective, these legislative moves also ignore current court proceedings and BCL’s rights to natural justice and they are also at odds with the ABG’s decision to place a moratorium over the Panguna project area until after the Bougainville referendum. ...read more on : Pacific Mining Watch
SHARE THIS
Share it Tweet Share it Share it Pin it