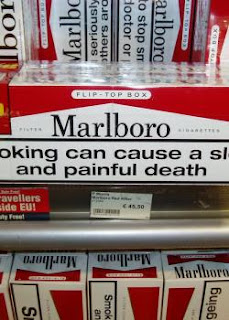 Importers and manufacturers of tobacco products will now have to pay a licence fee to operate their business in the country, says Health and HIV/AIDS Minister Sir Puka Temu.

He said in a statement Thursday that this was to enforce the Tobacco Control Act passed in Parliament in 2016.

The Health Department is in the process of finalising the licence fees and how they will apply to manufacturers and importers.

Sir Puka said the purpose of the legislation was to control the manufacture, distribution, sale and use of tobacco and its products.

The Tobacco Control Act was passed by Parliament in 2016 and certified by the Speaker in early 2017 to become operational immediately.

But in April 2017, the National Executive Council decided to allow a one-year grace period for manufacturers and importers to adjust to the new legislation.

“Now that the grace period is over, the Health Department will enforce the law because the use and the consumption of tobacco products pose serious health risks and contribute to the high cost of healthcare in Papua New Guinea,” Sir Puka said.

He advised manufacturers and operators to pay special attention to Section 24 which prohibits the selling of cigarettes in packages which contain fewer than 25 cigarettes, and Section 28 (4) which states that all tobacco products imported for sale or sold in PNG must carry a clear statement on the packaging that the product is “intended for sale in PNG.