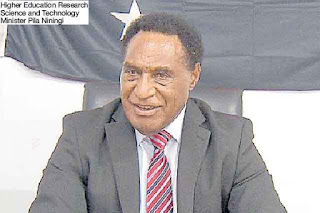 TWO sex-related allegations raised by a female student and a female staff against a University of PNG lecturer will be investigated, says Minister for Higher Education, Research, Science and Technology Minister Pila Niningi.
The allegations were raised with the university administration by the two who identified the lecturer and asked the administration to do something about it.
When the two women’s complaints reached his office, Niningi requested the university administration to provide him a report on what was being done to deal with them. He still has not received a response.
“We (ministry) had asked for a report but they (UPNG) never got back to us,” he said.
“That (allegations) is one of the things the interim council will look into and take action on. The sex allegations paint a bad picture of the university and warrants investigation and action.”
In a letter dated July 24, 2018 addressed to acting Vice-Chancellor Vincent Malaibe, Niningi said he needed to have a response prepared in case the matter was raised in Parliament.
He therefore asked that a meeting between department acting secretary Fr Jan Czuba, Malaibe and acting Chancellor Dr Nicholas Mann be held to “explore possible united response to this challenge and examine if the university has mechanisms and processes in place to avoid misconduct and to assess and determine any allegations of misconduct”.
The allegation by the female student was that the male lecturer had solicited “sexual favours in exchange for good grades”.
On August 13 last year, the female staff of the university wrote directly to Niningi complaining that her “sexual harassment” complaints against the lecturer beginning in 2015 had “not been attended to” by the university administration.
Niningi yesterday said no woman or student should be mistreated in such a way and the interim council would look into the matter and have it investigated.
“You can’t have (someone) doing that to PNG women or female students, (allegedly) asking for favours in return for good grades,” Niningi said.
Niningi on Monday sidelined the university council led by Mann and Malaibe “due to a failure to address financial mismanagement, and alleged fraud and corruption at the university”.
He appointed an interim council headed by acting Chancellor Jeffrey Dean Kennedy. The council later appointed Professor Kenneth Sumbuk as acting vice-chancellor. The National/ONEPNG
SHARE THIS
Share it Tweet Share it Share it Pin it