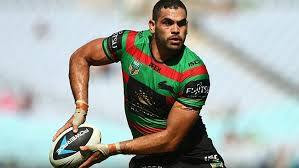  Greg Inglis to retire from the NRL at the end of the 2020 season
 ‘GI’ to retire from representative football at the end of the 2019 season
South Sydney Rabbitohs captain Greg Inglis has announced that he will retire from playing NRL football at the end of the 2020 season today.
Inglis, 32, has also announced that 2019 will be his final season playing representative football.
Inglis will have the opportunity to play over 300 NRL games by the completion of season 2020, and will also have the chance to add to his 39 Tests for Australia and 32 State of Origin games for Queensland in season 2019.
Inglis paid tribute to the sport of Rugby League, saying he owes everything to the game.
“Rugby League has been my life,” Inglis said.
“It’s what I’ve known. I feel like I have given everything I have to the game, and it’s given me everything that I  have in my life.
“I’ve been fortunate to play with two fantastic clubs in the South Sydney Rabbitohs and the Melbourne Storm.
“If it wasn’t for the Storm I would not have had the chance to fulfil my life’s dream.
“At the Rabbitohs, and as I’ve grown older, I’ve become a leader, a captain and a mentor to the current and next  generation of young Rabbitohs to wear this proud red and green jersey.
“I’ve been fortunate enough to represent my country, my state, and my people and those are memories that I will  cherish forever.
“To all of the coaching staff, players, family, friends, administration staff, Members and fans of the game, Todd  Greenberg and his team at the NRL, I want to say a massive thank you for everything that the game has given  me. I owe everything to the game.
“I grew up loving the sport of Rugby League, there is no other sport for me, and I’ve been lucky enough to live out  my dream.
“Therefore, 2020 will be my last season of NRL football. By announcing this now it means I can focus on the job  at hand here at South Sydney over the next two years.
“It will also be my final year of rep footy in 2019, if I’m fortunate enough to be selected, and I will give everything I
have to the Australian and Queensland jerseys as I have throughout my career.
“It’s time for myself to look forward and move onto my next chapter in life.
“We have a job to do over the next two years on the field at Souths and following that I still want to be involved  with the South Sydney Rabbitohs, whether it’s in a coaching or football role under Shane Richardson or working  with the community and Souths Cares under general manager Alisha Parker-Elrez.
“Finally, once again, thank you to everyone that has made it possible for me to live my dream and I can assure  you that over the next two seasons I will be giving 100% to achieving the success we want at South Sydney.