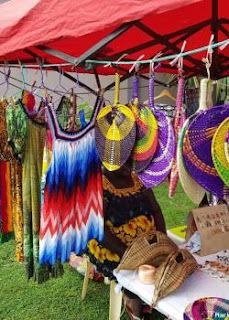 Lucy Walo, a mother who sews and sells her line of blouses at Boroko Craft Market in Port Moresby, said Asian fakes were bad for business.

She was selling the remaining blouses from last year’s independence batch for K20 (US$6.15) when The National caught up with her Tuesday.

Walo, from Pangia in Southern Highlands said when making the blouse using original material, they sewed the red black and gold coloured materials together into a blouse and later screen printed the bird of paradise and stars.

“The hard work we put into making these original blouses is the reason why we increase the blouse price to K50 (US$15.30) and above,” she said.

“The Asian fabric has the bird-of-paradise and stars already on it, unlike the original materials we use.”

Walo, who lives in Morata Two, said she had been sewing and selling blouses for more than 10 years.

She only recently started experiencing bad business when the Asian fakes started appearing.

The PNG flag blouse is mostly sewn and sold around September for PNG’s Independence because of the high demand at that time.