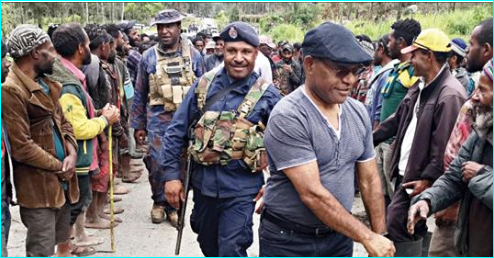 According to media reports  Ambeng Kandakasi went to Liop with provincial police commander Joseph Tondop and a contingent of soldiers and police.

The judge used his courtroom authority to not only stop a raging gun battle that morning, but was able to order two warring factions from the Walin tribe to lay down their arms and make peace.

There was fierce fighting last week which left many dead and properties damaged.

All this stopped abruptly when Justice Kandakasi, Chief Superintendent Tondop and a contingent from the Defence Force walked across the battlefield.

The judge, who hails from Laiagam, ordered a peace talk, and told leaders from both sides to hug each other and shake hands to stop the fighting.

Mr Tondop described the act as a miracle.

"It doesn't happen this way in the Hghlands. Normally, it takes an extended period of time to make peace after some form of appeasement like killing a pig. The Deputy Chief Justice definitely commands a lot of respect from his people," he said.