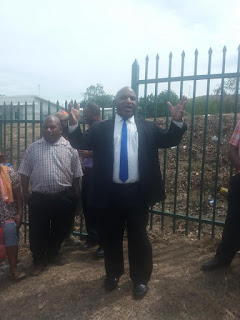 All 27 charges of conspiracy, stealing and money laundering against embattled lawyer Paul Paraka have been dropped.
Senior committal court magistrate Mekeo Gauli ruled yesterday that the criminal charges laid against Mr Paraka, principal of Paraka Lawyers, by the fraud squad (formerly known as the taskforce sweep team) was an abuse of the court processes.
Paraka’s legal battle spanned more than five years on charges relating to payments made to his law firm for legal services rendered to the PNG government between 2007 and 2013.
Mr Gauli said that the 27 charges (17 counts of conspiracy to defraud, five counts of stealing under false pretense and five counts of money laundering) were laid against Mr Paraka on July 31, 2014, by the same taskforce sweep team which was abolished by the police commissioner through the operation of NEC Decision No. 191 of 2014, only one month prior.
This meant that the taskforce sweep team had no jurisdiction to lay the charges at the material time, which rendered the act an abuse of the formal court processes.
Mr Gauli said also that the question of legality of the payments had already been cleared about three weeks before the charges were laid.
“In The National newspapers, dated July 8, 2014, the Prime Minister Peter O’Neill and the Attorney-General Mr Ano Pala published that Paraka Lawyers was legally paid,” said Mr Gauli.
“Even the office of the Secretary and Attorney-General made legal clearance of the payments made to Paraka Lawyers. Accordingly, I grant the defendant Paul Paraka’s application to strike out the charges for being an abuse of process,” he said.
A relieved Paul Paraka said in a statement yesterday that he was glad that his persecution at the hands of his rivals was finally over. And he vowed that he would be pursuing further litigation against individuals who were responsible for what he called “unlawful actions”.
He said that he would be seeking that these individuals be jailed for up to 10 years each under specific provisions of the Constitution (section 23) and the Criminal Code (section 619) for various criminal offences.
Mr Paraka had also called on the Police Commissioner to refer all files back to the Department of Justice and Attorney-General to be dealt with administratively as well as to effect the advice of the former attorney-general (dated July 6, 2014) to cease all unnecessary criminal investigations against him.