Kumuls come from behind to beat England Knights 32 - 22 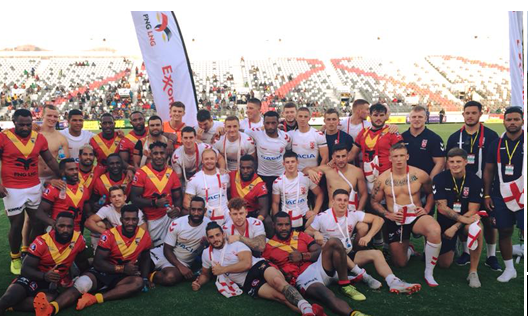 The Papua New Guinea  LNG Kumuls maintained their home ground record at the Oil Search National Football Stadium following a competitive 32-22 win over the England Knights on Saturday.
The win was also an early birthday present for Kumul captain David Mead who turned 30 years old yesterday as his birthday falls on November 4.
Despite having only 5,686 spectators in attendance, the home team led by Mead and the aggressive tackles by Nene Macdonald, who was later named man of the match, was a collective team effort to give the spectators something to cheer for.
THE England Knights took an early lead on the scoreboard by scoring two tries to Tom Lineham and Tom Davies in the opening 20 minutes of play. Dec Patton successful converted two from two that gave them a 12-0 lead over the home team.
The Kumuls regrouped and reshuffled their attacking sets with substitutes coming off the bench to add the extra boost. Ase Boas was also at the back-end of setting up plays for Nixon Putt to slice through for a try.
The visitors did not let the tempo down as they muscled up in defense resulting in a one-on-one strip to send Jack Walker for their third try of the opening half.
Again Patton found the uprights to add the two points to make it 18-0.
Macdonald put on his trademark aggressiveness in defence which kept the home fans cheering at the top of their voices. And with the seconds counting down to half-time, Justin Olam crossed over for the second try. Watson Boas was superb in his kicking, converting two from two for a 18-12 halftime score.
At the restart, the Kumuls refreshed and polished up on their opening half approach. This time the halves combination of Kyle Laybutt, Ase Boas and Watson Boas shifting to dummy half, gave the visitors some headache in their defensive sets.
It was strong and physical style of play, especially in defence from both teams resulting in brawl among players but match referee John Stone was in control to settle the situation and allow play to continue.
Kumuls had the upper hand on the scoreboard scoring three tries to Ase Boas, Mead, Macdonald while Watson had a field day with his boots kicking three from three, including a penalty to give the Kumuls a 32-22 victory.
Watson also improved his success rate registering six from six successful conversion attempts compared to their opening match in Lae.
Lineham bagged a double for the visitors in their only try scored in the second half with an unsuccessful conversion attempt. Post courier/ PNG Today
SHARE THIS
Share it Tweet Share it Share it Pin it