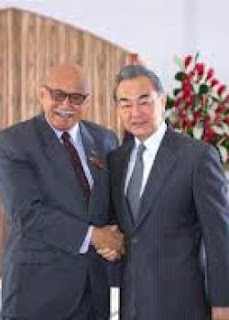 China and Fiji pledged on Tuesday to further strengthen all-round practical cooperation between the two countries.

The China-Fiji relations have witnessed rapid development since they established strategic partnership featuring mutual respect and common development four years ago, Wang noted, adding that China sees and develops its ties with Fiji from a strategic and long-term point of view.

China's support and assistance for Fiji has no political strings attached, is not intended for pursuing selfish interests, nor is it targeting any third party, Wang said.

China is willing to share experience of state governance with Fiji, strengthen mutually beneficial cooperation, assist in Fiji's development and jointly safeguard the legitimate rights of developing countries, he added.

Konrote said Fiji cherishes the strategic partnership with China. He thanked the Chinese side for offering assistance in bridge construction, infrastructure, agriculture and education, which has brought tangible benefits for the Fijian people.

Fiji is willing to learn from China's development experience and enhance mutually beneficial cooperation between the two countries, he said.

While meeting with Fijian Prime Minister and Foreign Minister Voreqe Bainimarama, Wang said China-Fiji friendship has withstood the test of changes in the international arena.

China and Fiji not only always treat each other on an equal footing, but also respect, understand and support each other, he said, adding that China firmly supports Fiji in pursuing a development path that suits its national conditions and enjoys the support of its people.

China has never attached any political strings to its assistance for developing countries, nor does it seek selfish interests, the Chinese state councilor also stressed.

China-Fiji cooperation belongs to the South-South cooperation and mutual assistance between friends and brothers, he added.

He called on the two sides to start negotiations on free trade agreement at an early date so as to uphold multilateralism and free trade through concrete actions.

Wang welcomed Fiji participating in the first China International Import Expo (CIIE) which is slated to kick off next Monday.

For his part, Bainimarama said that over the past 43 years since the establishment of the diplomatic relations between Fiji and China, the bilateral relations have enjoyed fast development with booming friendly exchanges and mutual cooperation in such fields as trade, investment, sports and localities.