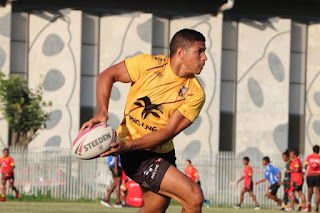 Gabbie and Russell will wear the national colours for the first time as wingers.

Kyle Laybutt will also debut in the Prime Minister’s red black and gold jersey when he runs off the bench.

Incumbent PNG LNG Kumuls captain David Mead will lead the side with James Segeyaro, who captained the Pacific Test in July during Mead’s absence, as vice- captain.