9/20/2018 Headlines, NRL, Sports
Greg Inglis doesn't particularly like playing against former teammates, especially when they're as good as Cooper Cronk. 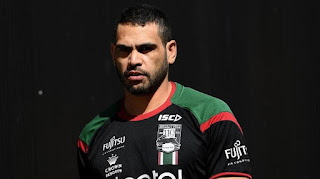 Inglis and Cronk played in four grand finals together at Melbourne Storm, won two of them (2007, 2009), and played in the halves together in two of those matches.

On Saturday night, each will be trying to keep the other out of next Sunday's Telstra Premiership grand final.

The preliminary final between the Rabbitohs and Roosters has many storylines. The friendship formed between 31-year-old Inglis and 34-year-old Cronk in Storm, Queensland and Australian sides, is one line that extends the longest and deepest.

"But coming up against him ... well, you want to play against the best – that's what you want to do. It doesn't matter if they're a good mate, or former teammate.

"And that's what makes our game so good because we have such great players and they are spread across the whole 16 teams.

"Coops and I have separate jobs to do on Saturday, but we have the utmost respect for each other."

Still, Inglis won't let any of his teammates be overawed by the brightness of Cronk at No.7.

The Rabbitohs skipper actually thinks the danger-men in the Roosters line-up are the No.6 Luke Keary and No.1 James Tedesco.

"Having Keary back (from a knee injury) makes them stronger and his linking with Tedseco is definitely threatening," Inglis said.

"Those two are forming a nice combination so we have to try to nullify that. And that takes attitude."

It also requires a certain amount of patience, as expectation is growing among Rabbitohs fans that a repeat of their 2014 premiership triumph is on the way.

"We just brush it, and put it aside as best we can," Inglis said.

"We know what we're capable of. But we have to turn up ready to play – it seems like the easiest thing to do but it's the hardest.

"Playing our brand of footy for 80 minutes and not in patches is the goal.

"And not offering a 70 per cent completion rate, like we did against the Dragons (30 from 42 sets). We need to be up around 90 per cent or we'll give ourselves little chance."

The number of fans who turned up to Tuesday's training – waving South Sydney flags and wearing the famous cardinal and myrtle jerseys – proves the love they have for their football team.

"Obviously being in the prelim is the exciting thing. It doesn't feel like four years since we were at this stage," Inglis said.

"It's gone so quick. I think back 12 months ago and I wasn't anywhere near this kind of situation," he said referring to his knee reconstruction and mental health battles.

"As a team and as a club, we're just stoked and so happy to be back in this position again. We've lost a few players, got a new coach, but here we are."

Despite Inglis' lengthy association with big matches – including being a Clive Churchill Medallist – he gets anxious prior to kick-off.

"I still get nervous but I've got no routine before big matches .. I just chill ... do nothing.

"The nerves will be there no matter what I try to do. Once I get to the ground and start getting taped, I know it's time to zero in and stop the chilling."