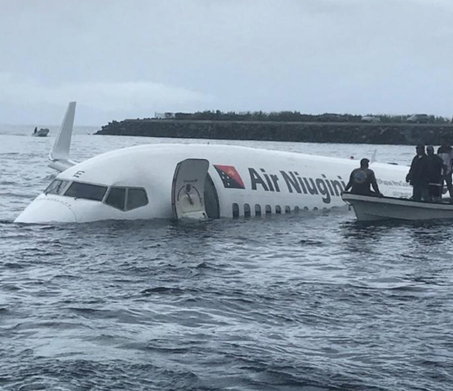 Papua New Guinea's national airline Air Niugini aircraft has crashed in Chuuk Federated States of Micronesia. According to Guam Post, torty-six people aboard Air Niugini Flight 73 miraculously survived after the flight fell short of the runway on Weno International Airport in Chuuk this morning and landed in lagoon waters.

"No serious injuries ... Everybody is alive!" Jimmy Emilio, the airport's manager, confirmed by phone to The Guam Daily Post.

When the plane went down, a lot of local boaters and the local rescue team immediately rushed to the crash site, Emilio said.

"Everybody is safely off the plane," he added.

He said the passengers and crew were transported to the local hospital and as far as he knows, no one was badly injured.

Dr. Siana Shapucy, the Chuuk State Hospital's acting medical director, said at 2 p.m. Guam time Friday that eight people were hospitalized. One was on a ventilator while some of the other patients had various fractures.

A video reposted by Eriko Rekis on his Facebook page shows many boaters immediately responding as the aircraft hit the lagoon water, and helping passengers get off the half-submerged plane and transporting them to safer ground.

The aircraft is a Boeing 737, Public Affairs Manager Ian Gregor for the FAA Pacific Division confirmed.

The U.S. Coast Guard Cuttter Washington, which happens to be in nearby waters, is heading to the crash site to help.

Air Niugini Flight 73 travels between Chuuk and Port Moresby in Papua New Guinea. The flight was to take two hours and 40 minutes.

A United Airlines flight from Guam that was scheduled to land at the same airport in Chuuk has been diverted to Pohnpei.