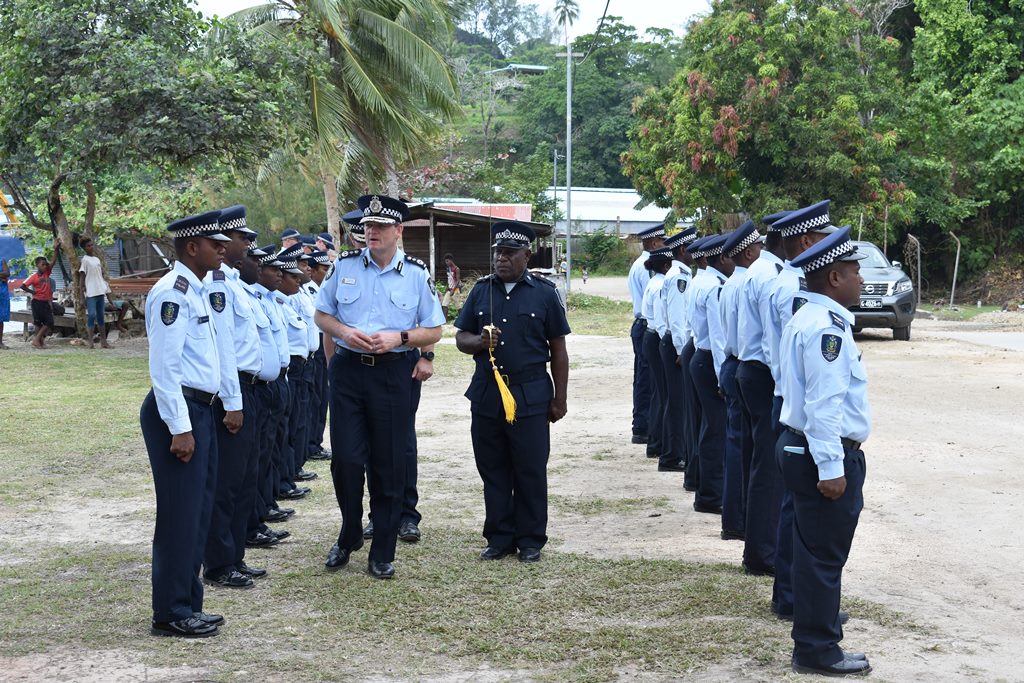 The Royal Solomon Islands Police Force (RSIPF) today show-cased the capability and challenges faced by its provincial police stations when it took the visiting Australian Federal Police Commissioner, Andrew Colvin on a visit to the Tulagi Police Station in Central Province.

RSIPF Commissioner Matthew Varley, who accompanied AFP Commissioner Colvin on the visit says, “I am indeed happy to welcome Commissioner Andrew Colvin, of the Australian Federal Police to Tulagi Police Station, one of the provincial station in Central Province to see for himself how officers at the province are getting on with their job.”

“I am very impressed with how Tulagi Police Station under the leadership of Provincial Police Commander, Superintendent Patricia Leta has been able to take the lead in the roll out of the Crime Prevention Strategy especially in establishing Ward Crime Prevention Committees resulting in communities working together with the police to prevent crime in the Central Province,” says Commissioner Varley.

AFP Commissioner Andrew Colvin says, “It’s an honour for me to be here at Tulagi and to see some of development in the RSIPF at the provincial level. I am equally impressed with the amount of operational and crime prevention activities that PPC Superintendent Leta and her officers are able to achieve with the resources that are available to them. They continue to do this despite some of the local challenges. I am very impressed with their commitment to their community.”

He adds: “This is not my first time to Solomon Islands. My last time was three years ago. Indeed, I am inspired to learn that Central Province is the first province in the Solomon Islands to set up its crime prevention committees and it’s an achievement for the RSIPF.”

During the short visit, AFP Commissioner Colvin inspected a parade by RSIPF Officers at the Tulagi Police Station and also toured some of the historical sites in the township as the first capital of Solomon Islands.

Other guests during the visit included the Australian High Commissioner to Solomon Islands H.E Roderick Brazier, Commander of SIPDP, John Tanti and other SIPDP Advisors and RSIPF senior officers.

The AFP Commissioner Andrew Colvin is currently on a three-day tour of the RSIPF.