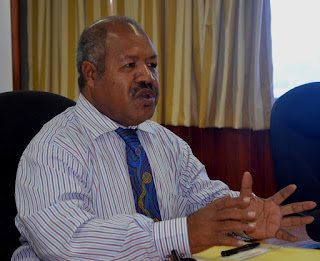 Governor Powes Parkop warned that demolition of houses and vagrancy were being considered as a deterrent to ethnic clashes in the settlements.
He decried the fight as backward.

Mr Parkop said since taking office in 2007, he-through the commission-had initiated programs and policies to promote mutual respect, unity, peace and harmony amongst city residents who are of cultural diversities, thousand tribes and 860 languages.


He added that significant progress was made in this pathway, challenging the city dwellers to embrace high quality of life whilst doing away with such a ‘disease’ which impedes development.

The fight devoured two lives, several others injured and hospitalised, three houses and other properties burnt down to ashes.

Speaking to thousands who gathered this morning (Sunday, August 05, 2018)  at the Paga Hill ring road after the end of this week’s Walk and Yoga for Life, Mr Parkop said if they could not accept to respect each other and live in peace and harmony here, that showed that they were not fit to live together in the city.

He said the successful implementation of the initiatives had reduced it.

Governor Parkop said the Active City Development program’s WYFL was tailored towards advocating and promoting the outcome of residents realise mutual respect amongst each other and live in peace and harmony.
SHARE THIS
Share it Tweet Share it Share it Pin it