8/16/2018 Headlines, Sports
The Papua New Guinea Hunters aim is to maintain a spot in the top six of the Intrust Super Cup.
But to host a semi-final at home is also a possibility but coach Michael Marum said sitting on sixth spot is a good result given the performance at the start of the season.
“It’s a pretty long season but our aim is to be at the top six and after that its the finals. We will be certainly taking one game at a time,” Marum said. 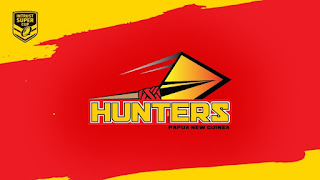 Certainly there’s no secret in the Hunters successful season last year.
There was nothing different this year knowing pretty well that the last two remaining games will be tough.
Winning a premiership is something else but defending it comes with a lot of effort and the Hunters will put everything in front of their home crowd, Marum said.
It will also be the last home game before heading to Australia for their last game against the Queensland Capras.
“Wynnum Manly Seagulls are a very good team and after their victory against the North Devils last weekend, they will come hard against us,” he said.
“We want to ask all our supporters to come in numbers to support us as this will be our last home game and after this there won’t be any more ISC games held here in Port Moresby.
“We handled the competition really well and again, we are happy to be sixth at the moment but we have two games to go so we will take one game at a time. This weekend against Seagulls and next weekend will be against Capras and see where we are.
“Right now we are not looking at what’s ahead of us. If we finish this season in the top four, then we will (hopefully) host another home semi-final but like I said, we will be taking one game at a time and we are not in a hurry to look ahead,” Marum said in an interview yesterday.
Marum said Sunday’s game at the Oil Search National Football Stadium will also be the last time for fans and supporters to see some of the players competing.
“Once again, I urge all our supporters to come in numbers and support as this will be the only time you will see these players playing at home. Some of them will not be with us anymore,” Marum said. Post Courier/OnePNG
SHARE THIS
Share it Tweet Share it Share it Pin it