8/09/2018 Headlines, Pacific News
Pacific Island states this week celebrated the 33rd anniversary of the signing of the Treaty of Rarotonga of 1985, a landmark regional pact that established the Pacific as an internationally recognised nuclear-weapon-free zone. 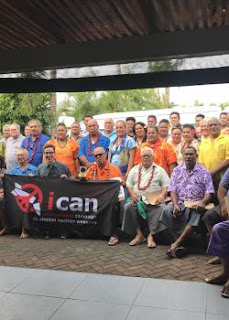 Government officials from the region also declared their strong support for the 2017 Treaty on the Prohibition of Nuclear Weapons, which aims to make the entire world free of nuclear weapons.

At a reception on Monday in Apia, Tim Wright of the Nobel Peace Prize-winning International Campaign to Abolish Nuclear Weapons (ICAN) praised Pacific Island states for their extraordinary leadership in the decades-long struggle against nuclear weapons.

He congratulated the governments of Fiji, Kiribati, New Zealand, Palau, Samoa, Tuvalu and Vanuatu for having signed the new treaty, and Palau for being the first nation in the region to take the additional step of ratifying the treaty.

Jeffrey Antol, Director of the Bureau of Foreign Affairs of Palau, said that every nation, however small, has the right and responsibility to speak out against nuclear weapons, for we all know the devastation these weapons can cause.

“We cannot simply leave it to the nuclear powers to decide whether to disarm,” he said. “We must work together to put pressure on them to do so, and we must make it clear that we consider these weapons to be illegal.”

He issued a strong appeal to all nations of the region that have not yet done so to sign and ratify the UN treaty during the high-level segment of the UN General Assembly in New York next month.

The Prime Minister of Samoa, Tuila’epa Sailele Malielegaoi, signed the treaty last September, but the Samoan government has not yet ratified it.

Speaking on Monday, Doreen deBrum, a senior foreign ministry official from the Republic of the Marshall Islands, explained why the treaty is so important to her country and the entire Pacific.

“The people of the Marshall Islands understand from first-hand experience the horrors of nuclear weapons and their threat to human life, to our children, to our mother earth,” she said.

“Though the nuclear tests at Bikini and Enewetak atolls ended long ago, the impacts are still felt today and will persist well into the future, with increased rates of cancer and other radiation-related illnesses in our communities.”

deBrum’s late father, Tony deBrum, who served as the nation’s foreign minister up until 2016, was a passionate advocate for nuclear disarmament and supporter of ICAN. He wanted justice for the Marshallese people, but more than that, he wanted all of humanity to live free form the nuclear threat.

His daughter said that she was proud that her country had voted in favour of adopting the Treaty on the Prohibition of Nuclear Weapons last July. The treaty is now under review by the Nitijela, or parliament.

“This treaty offers such great hope that we can finally bring the era of nuclear weapons to an end, before there are any more victims,” deBrum said.

Tahiti is another Pacific nation that continues to suffer the terrible consequences of nuclear testing. However, it is unable to join the UN treaty because has not yet gained independence from France.

On Wednesday,Wright from ICAN spoke to members of SUNGO, the Samoan Umbrella for Non-Governmental Organisations, at the Millenia Hotel about the ongoing legacy of nuclear testing in the Pacific region.

He said that the United States, France and Britain had caused great harm to the pristine environment of the Pacific and to the health and wellbeing of Pacific islanders by conducting more than 300 nuclear test explosions in the region from 1946 to 1996.

“The new treaty cannot undo the harm that has already been caused,” he said, “but it can help to ensure that no one else ever suffers the consequences of the use or testing of these immoral weapons.”

He brought with him to Samoa the Nobel Peace Prize medal awarded to ICAN at a ceremony in Norway last December for the group’s efforts to draw public attention to the effects of nuclear weapons and its role in bringing about the UN treaty.

“As more and more countries join the treaty, the norm against the possession of nuclear weapons will grow stronger and the pressure on the nuclear-armed countries to disarm will intensify,” he said.

The vast majority of the world’s countries, including Samoa, strongly reject nuclear weapons.