8/21/2018 Business, Headlines
A PROFIT of US$79.2 million (K262 million) was announced by Oil Search in the company’s first half year report, which is a 39 per cent decrease compared to figures for the same period last year. 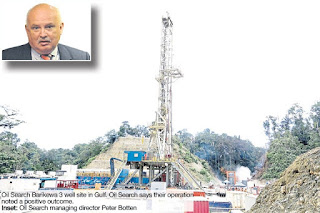 Oil Search managing director Peter Botten, pictured, said their operations also noted a positive outcome with the PNG LNG Project operating above pre-earthquake levels.
“Oil Search’s financial performance for the first half of 2018 reflected the impact of the 7.5 magnitude earthquake, which struck the PNG Highlands in late February 2018 and resulted in the temporary shut-in of all Oil Search-operated production and the PNG LNG Project,” he said.
“Pleasingly, all production facilities are now back online, a major achievement by our and ExxonMobil’s operational teams, with
PNG LNG operating above pre-earthquake levels and production from Oil Search’s operated facilities progressively ramping up.
“The company reported a net profit after tax for the first half of US$79.2 million, 39 per cent lower than the first half of 2017, a creditable result given the impact of the earthquake.
“Total revenue declined by 18 per cent to US$557.8 million (K1.8bil), with lower product sales volumes partly offset by higher realised oil, gas and LNG prices. Total unit production costs increased to US$$14.04 (K46) per boe (barrel), reflecting our largely fixed cost base spread over lower production, combined with logistics and remediation costs associated with the earthquake, net of insurance recoveries.
“In addition, costs included the purchase of an LNG cargo to keep the LNG trains cool while production was shut in, which reduced significantly the time required to ramp up LNG production when the trains recommenced operations.
“Maintenance activities, particularly for PNG LNG, were brought forward as well, to take advantage of the facilities shut-in post the earthquake. Other operating costs, including community aid costs, remained flat, at US$55 million (K182mil).”
SHARE THIS
Share it Tweet Share it Share it Pin it