Remaining Games Will Be A Test For PNG Hunters 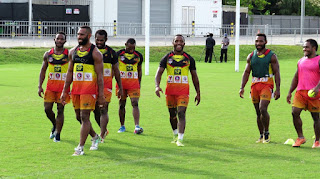 The Hunters dreams of keeping the final hopes alive is diminishing as they fell to the Redcliffe Dolphins  who have made their first win on Papua New Guinea soil following their   28-20 win at the Oil Search National Football Stadium in Port Moresby yesterday.

While it isn’t impossible, the last seven matches will prove to be a test of character for Queensland’s Intrust Super Cup title holders.

The second-placed Dolphins who were down 14-12 at half-time, put on a decisive 14 minute spell after the break to set the stage for the win in blistery conditions.

The home side down 22-14 had their tails between their legs with 15 minutes remaining to produce their usual late flurry backed by the parochial home-crowd.

This has almost always worked against the Dolphins in the past, but not this time.

Despite an encouraging try on the right edge to winger Brendan Gotuno following through a grubber from Ase Boas to bring them to within two points, the visitors doubled up through prop Sam Anderson running off a short pass to score a reliever with four minutes remaining.

The Hunters failed to make any headway in the dying minutes to give away a crucial chance to win at home.

Cullen and lock Jamil Hopoate looked good on the fringes for the win.While for the Hunters they looked ordinary when they allowed several soft tries, specifically the first from Cullen when he stepped through what looked to be a struggling Ase Boas four minutes into the game.And the crucial period when dummy half Wartovo Puara Jr was on the bench did not allow for their momentum to carry.