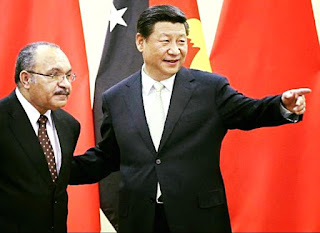 "Papua New Guinea, the second Pacific Island nation in the southern Pacific Ocean which stretches across Oceania and Asia, has paid attention to developing ties with Asian countries for ages,” said Professor Han Feng, of the Chinese Academy of Social Sciences.

“It is natural for PNG to strengthen ties with China, considering China's increasing influence," Han said, noting that PNG is also important to promote the Belt and Road initiative.

He said some Australian experts and media are prejudiced against the Belt and Road initiative and negatively hype China's presence in the area.

But China is promoting the initiative and launching cooperation with these countries under the principle of equality, coordination and transparency.

"Some countries, especially the US and Australia, are oversensitive and worried about China's increasing presence in the southern Pacific Ocean region since Chinese enterprises have curtailed their dominance in local markets,” Yu said.

“They can no longer pressure some countries by loan agreements as many turn to China for help," he said, adding that China's financial assistance is without subsidiary conditions.

Yu said that it is natural to see China's political and economic influence has increased in the area as more cooperation has been launched and it is also normal for China to take part in enlarging some ports in the areas for trade or build satellite observation or scientific stations.

"China is not seeking military presence in the area but to better take part in local development and protect its own interests,” he said.